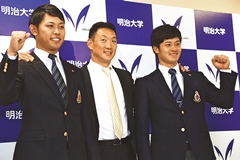 Takayama (at left) and Sakamoto strike a fighting pose on either side of Tomoaki Kanemoto, the new manager of the Hanshin Tigers. 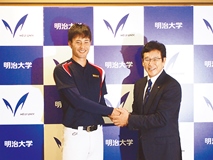 At the professional Japanese baseball draft conference held in Tokyo on October 22, two members on the Meiji University Athletic Association's Hardball Baseball Club were selected as first-round choices. One was Shun Takayama, an outfielder (currently Meiji University School of Arts and Letters fourth year; graduated from the Third Junior & Senior High School of Nihon University), who was the first choice of both the Hanshin Tigers and the Tokyo Yakult Swallows. By lot, Hanshin won the negotiation rights. The other was Kenta Uehara, a pitcher (currently Meiji University School of Commerce fourth year; graduated from Koryo High School), who was the first-round choice of the Hokkaido Nippon-Ham Fighters. Seishiro Sakamoto, team captain and catcher (currently Meiji University School of Arts and Letters fourth year; graduated from Riseisha High School), was picked by Hanshin, like Takayama, in the second round. This was the second time that two members of the Meiji University Hardball Baseball Club were picked in the first round of the draft. The feat was first accomplished 31 years ago, when Mitsukuni Takeda and Katsumi Hirosawa were the first-round choices of Taiyo Whales and Yakult, respectively, in 1984.