Performance of “The Comedy of Errors” by a Cambridge student company 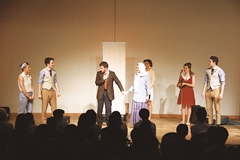 At the climax of “The Comedy of Errors”
A performance of the famed Shakespearean play “The Comedy of Errors” was staged by the Pembroke Players, a theatrical company whose members are students of the University of Cambridge, the prestigious British university, at Liberty Hall on the Surugadai Campus on October 2.This was the eighth in a series of such performances, which are staged as part of the British Studies program initiated by the Headquarters of International Collaboration in the 2001 Academic Year.The Pembroke Players are widely known as a distinguished company that has produced many famous actors ever since its founding in 1955.