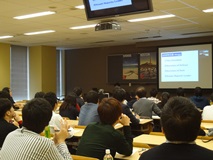 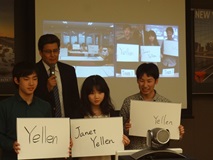 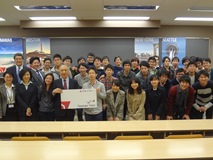 Five concerned faculty members in the Meiji University School of Political Science and Economics jointly held the "WSJ Quiz Contest" on November 14, 2015, as part of educational activities for development of global human resources. The contest was held by means of a video conference system, with the cooperation of the Japan Association for Global Competency Education, with the support of Dow Jones (Japan) K.K. and Delta Air Lines, Inc., and in coordination with the Meiji University Surugadai Campus and the Meiji University ASEAN Center, which is in Bangkok, Thailand.
The contest attracted the participation of about 50 students (including some exchange students from outside Japan) of the Meiji University School of Political Science and Economics and about 40 students of the Srinakharinwirot University School of Economics and Public Policy in Thailand. They vied with each other in both individual and group quizzes, whose questions were taken from news articles in the WSJ Asian edition over the last year and other sources.
The contest was very lively, and there were prizes for the winners. The winners in the individual quiz from Meiji University and Srinakharinwirot University (one each) were given a ticket for round-trip flights between Tokyo and Bangkok from Delta Air Lines, one of the supporting companies, and those in the group quiz, free access rights to the WSJ online edition for one year, from Dow Jones (Japan).

The CBOE Volatility Index, called the VIX, is a key measure of market expectations of near-term volatility. The VIX is also known as what?