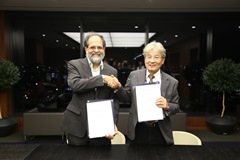 The Meiji Institute for Advanced Study of Mathematical Sciences (MIMS) recently concluded an agreement for establishment of an international research network (GDRI) to promote joint research in the field of mathematics with noted research institutes in Japan, France, the Republic of Korea, and Taiwan.
GDRIs are projects of international research cooperation provided by the French National Center for Scientific Research (CNRS).On October 28, researchers from the institutes participating in the GDRI joint research gathered on the Nakano Campus of Meiji University to sign the agreement (see the photo). MIMS has appointed Dr. Masayasu Mimura, Professor and MIMS Vice Director, to serve as project leader, and is going to promote a four-year Project of Research Fusing Biology and Mathematics by research institutes in Japan, France, Korea, and Taiwan. The GDRI is positioned as part of the international network related to the kind of 'Mathmatical Sciences Based on Modeling and Analysis' advocated by Meiji University.

The MIMS is a research institute founded by Meiji University in 2007 for the advancement and diffusion of mathematical sciences that makes a contribution to society. It is a center of international research devoted to the mathematical examination of phenomena appearing in society and nature. It is engaged in energetic research interchange with institutes in Europe and other Asian countries.