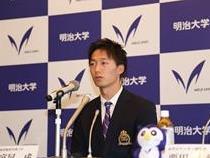 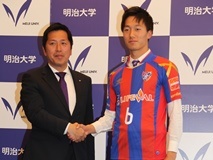 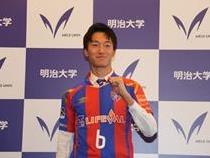 On February 8, the Meiji University Athletic Association’s Soccer Club held a press conference at Shikon Kan Alumni Memorial Building on the Surugadai Campus, in connection with Sei Muroya (third-year student in the School of Political Science and Economics) joining F.C. Tokyo, a J1 League soccer club. Muroya is also on the U-23 Japan National Team and took part in the AFC U23 Championship Qatar 2016, which also constituted the Asian qualification finals for the Rio Olympic Games. He appeared in five of the six matches (tying the team record) and made vital contributions to the team’s victory.
Muroya appeared at the press conference together with Daisuke Kurita, head coach of the Athletic Association’s Soccer Club. Head coach Kurita voiced his expectations for Muroya, while Muroya commented on his aspirations for the future, saying that his goal was first to become a regular starter on the F.C.Tokyo squad, play an active role on the national team at the Rio Olympics, and eventually be chosen for the Japan National Team and perform well on it.
Back
News & Events