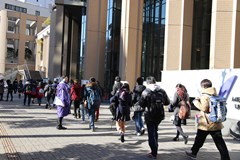 Students bundled up in coats, hurriedly head to take the entrance exam (Surugadai)
The entrance exams for the FY 2016 at Meiji University have been completed, with certain exceptions, such as the entrance examinations based on the exams conducted by the National Center for University Entrance Examinations (second semester), applications for which will be accepted until March 4.Excluding special entrance exam and admission-upon-recommendation applicants, the number of general entrance exam applicants was 108,055 as of February 9. This led to the total number of applicants exceeding 100,000 for the tenth consecutive year and was higher than in the previous year for the second consecutive year. The shift to the online application system for all general entrance exams is thought to be one of the factors behind the increase.

Applications for entrance to major private universities for the FY 2016

Based on data from DAIGAKUTSUSHIN Corporation (as of February 20, 2016)
* indicates final figures for the number of applicants