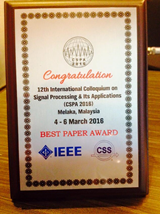 For Mr. Tanji, this marks the second occasion on which he has received a Best Paper Award, following on from the 2013 International Workshop on Smart info-Media Systems in Asia (September 30 - October 2, 2013). Various papers are also included in Signal, image and video processing, published by the Journal of The Institute of Electronics, Information and Communication Engineers and Springer.