Symposium jointly hosted by Meiji University and the Center for iPS Cell Research and Application of Kyoto University (CiRA) - Collaboration between iPS Cells and Medicine, Agriculture, and Engineering: Perspectives on New Medicine - 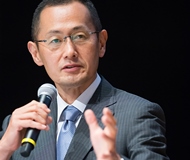 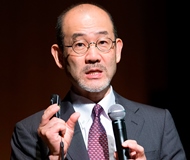 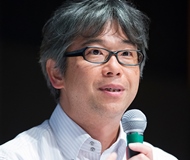 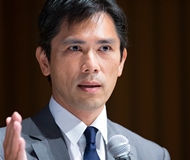 Dr. Masaki Nagaya
Given the current pace of research into diseases and their treatment, the day patients suffering from terminal disease can be saved may arrive sooner than imagined. On July 26th, the symposium “iPS Cells and Collaboration between Medicine, Agriculture, Engineering: Potential for New Medicine” took place. Prominent panelists such as Dr. Hiroshi Nagashima from Meiji University and Nobel Prize awardee Dr. Shinya Yamanaka from Kyoto University presented state-of-the-art research and conducted open-talk sessions with the audience. Here is gist of the talks presented on that day. (The Symposium was held on July 26 at the Academy Hall on Surugadai Campus of Meiji University.)

Talk Title: iPS Cells and the Dawn of New Medicine
Dr. Shinya Yamanaka
Professor, Kyoto University
Director, Center for iPS Cell Research and Application (CiRA)
Regenerative medicine and innovative drugs will save patients suffering from incurable diseases
iPS cells were developed by our team in 2006; the technology is however still primitive, with much room for improvement. iPS cells are a new type of stem cell created by introducing four types of genes, also known as Yamanaka factors, into a tiny amount of cells in blood or skin. The Center for iPS Cell Research and Application (CiRA) at Kyoto University has set four goals to be accomplished by 2030.

The first goal is to promote regenerative medicine using the iPS cell bank. iPS cells can be produced from individual patients, but the process takes nearly half a year to complete and the cost amounts to thousands of dollars. Thus, by establishing these cells beforehand and keeping them in stock, the cost and time involved can be decreased. This is only the beginning of efforts to promote regenerative medicine using the iPS cell bank. For instance, last year, eye surgery using iPS cells in patients suffering from age-related macular degeneration was conducted. It won’t be long before we start conducting clinical trials in patients with Parkinson disease.

Drug discovery using iPS cells is the second goal. In medicine, it is common knowledge that each patient responds differently to different drugs. iPS cells can be applied in this context to examine the reason for such differences. Such investigative research will lay the foundation for personalized medicine, wherein treatment can be tailored to the individual needs of each patient.

The third goal is to create new frontiers in life science and medical care with iPS cell technology, such as generating a heart or pancreas in patients with degenerative diseases, or even ova and sperm for fertility treatment. For the advancement of medical science, it is similarly necessary to share up-to-date information with the general public.

The fourth and final goal is to establish the best support system for researchers and the ideal research environment. For this, we will be teaming with experts from various related disciplines—communication, bioethics, intellectual property, and more. We will also set up a research fund for investigation into iPS cells to reach this goal. With these four goals in mind, we are working day and night towards the application of iPS cells in current medicine.

Dr. Jun Yamashita
Center for iPS Cell Research and Application, Kyoto University (CiRA)
Professor, Department of Cell Growth and Differentiation
Finding a cure for patients with severe heart failure
Every year in Japan, about a million people die of various causes. The most common cause of death is cancer, which accounts for one-third of the total deaths, and this is followed by heart disease as the second most common cause of death. The third most common cause is cerebrovascular disease. Given these statistics, it is important to find a cure for heart failure and blood vessel malfunction, as these two conditions are common in most people who die from heart disease.

Cardiomyopathy is a heart condition that can only be treated with heart transplant. In cardiomyopathy, the heart muscles become enlarged, thick or rigid, lose elasticity, and gradually show a decrease in their ability to pump blood through the body. About 20,000 patients currently suffer from this disease, and there are about 30 cases of heart transplants a year on an average; this means that there is a considerable fraction of patients who may require heart transplants but do not receive them. It is my goal to do something to change this situation, and that is the mission of my research.

By developing blood vessels from ES cells and iPS cells, it is possible to generate cardiac muscle cells as well as create a three-dimensional structure of the heart from differentiated cell groups from circulatory organs. Regenerating hearts does not involve mere transplantation of myocardinal cells. For instance, Nobel Prize laureate Dr. Shimomura’s discovery, GFP (green fluorescent protein), was used to tag 3 million myocardinal cells and inject them into the rat; however, this did not rescue heart function.
The experiments so far indicate that it is not only important to induce the differentiation of cells into the required type, but it also important to graft the required cells into a living heart. Our method for differentiation and induction can be used to induce cell types of the blood vessels or cardiac tissues. This means that it is possible to generate sheets of cells that resemble cardiac tissue and transplant it into a rat. This technology is being refined through experimentation, and right now, we have reached the stage where we can effectively lengthen the life of transplanted cells. This was achieved by incorporating some ideas from cell engineering: jelly-like small particles called gelatin hydrogel were placed between layers of cell sheet leads. We believe that this is just the beginning of a long journey into the regeneration of tissues and organs, and it may end only when we learn how to use this technology to save patients with severe heart failure. We are striving towards this goal, one step at a time.

Cloning pigs for developing cures for incurable diseases
At Meiji University’s International Institute for Bio-Resource Research (MUIIBER), the research undertaken integrates the disciplines, medicine, agriculture and engineering. At this institution, I am working on developing original bio-resources such as genetically engineered pigs and cloned pigs.
There are many diseases for which the currently known medicines and surgical methods have no cure. If we can create a precise disease model for such diseases, pre-clinical research can be conducted, which will lay the basis for research into their treatment.

For producing model animals, we use a method called “somatic cell cloning.” This process differs from sexual reproduction, which involves fertilization or the fusion of a male sperm with a female ovum. In somatic cell cloning, new organisms are developed from individual cells. What we do is transplant the artificially cultured nucleus of a cell into the cytoplasm of an ovum, which already contains a nucleus with its own genetic information. The first step is a special preparation step to isolate the nucleus from the original animal cell. Then, in the next step, the nucleus is implanted into the female uterus for reproduction. This process does not involve fertilization, as it is a kind of asexual reproduction.

Pigs are an ideal model animal on account of their anatomical and physiological similarities with humans. With the help of a little tweak in the somatic cell cloning technique, we can fairly easily produce genetically modified pigs. How can we do this? By integrating a new gene into transplanted cells or knocking out specific genes, we can create pigs with various hereditary disorders such as immunodeficiency disorders, Duchenne muscular dystrophy, congenital metabolic disorder, hereditary cardiomyopathy, and diabetes.

As we all know, diabetes increases the risk of many serious health problems. The typical conditions associated with diabetes are kidney disorder, cataract, and retinopathy, which is a nodular glomerulosclerosis, in the pig model of diabetes. In such a model, we can test the effect of implanting artificial pancreatic islets. Finding cures for intractable disease will be an ongoing challenge for mankind.

Dr. Mamoru Aizawa
Professor, Department of Applied Chemistry, School of Science and Technology, Meiji University
Orthopedics Group, MUIIBR
Paste-like artificial bones for minimally invasive treatment and development of a scaffold for cell culture
Biomaterials can be incorporated directly into cells or living bodies, where they have the potential to facilitate regenerative processes and generate new bones or organs. In my lab, we are working on developing new types of medical material using apatite, which is a material that is nearly identical to the principal component of bones and teeth.

One of our inventions is a paste-like artificial bone. The compound is created by mixing powdered apatite with kneading liquid, and it then injected into the body without the need for any invasive surgical intervention.

With the current increasing trend in the lifespan of the worldwide population, the number of patients who suffer from diseases such as osteoporosis, commonly seen in the elderly, will inevitably increase. Thus, developing functional artificial bones is one of the most important missions for medical researchers. We are also working on making a scaffold for creating three-dimensional cell structures. It is akin to building a three-dimensional cell structure within the cultured cells using fiber-like apatite.

Finally, apart from working on these “bone generation” projects, together with Dr. Tomokazu Mastsuura from the Jikei University School of Medicine, we are working on regenerating the liver by using a system similar to a bioreactor. In the near future, we hope to succeed in regenerating cells with a three-dimensional structure using iPS cells, and if we are successful, we believe that its impact in regenerative medicine will be far reaching.

Dr. Masaki Nagaya
Professor, Organization for the Strategic Coordination of Research and Intellectual Properties, Meiji University
Organ Regeneration and Organ Transplantation Group, MUIIBR
Delivering frozen cells for cell therapy worldwide
People who have brittle diabetes often experience extreme swings in glucose because they are unable to control their blood sugar level. One of the treatment methods for these patients is the transplantation of islets of Langerhans (pancreatic islets). In this method, islets from the pancreas of a deceased organ donor are purified, processed, and transferred into another person.

There was a breakthrough in this treatment in the year 2000: researchers in Canada developed a protocol for the transplantation of islets into human patients. However, there are still four issues that need to be solved with regard to this technique. First, it is difficult to isolate pancreatic islets (tissue cells in the pancreas). Second, the immunosuppressive drugs used in the process of transplantation are harmful to these pancreatic islets. Third, these islets cannot be transplanted into the pancreas directly. Lastly, the procedure costs over 15 million dollars.

Apart from these issues, pancreatic islets need to be isolated from the pancreas within 12 hours of removal of the pancreas from a donor, which is very difficult in practice. Moreover, for the transplant to be successful, apart from the blood type, the HLA (Human Leukocyte Antigen) also needs to be matched with the donor. These hurdles make it extremely difficult to find a match within the 12-hour limit. In northern America, about 80% of donated pancreas are not used and are thus disposed. To solve these issues, at MUIIBR, we are developing a technique for frozen preservation of pancreatic islets, which involves placing these islets in a hollow fiber for vitrification freezing. We found that with this preservation technique, the quality of the islets can be kept intact.

In addition to this, at Meiji University, we are working on the vitrification of embryos, kidney tissues, and cartridge cell sheets. Someday, not in the far future, we hope to create a system to deliver these frozen cells to patients anywhere in the world who need cell therapy.

* The information presented here is as of September 2015.