Determination of the next president 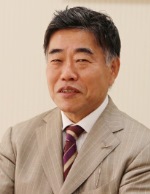 Main publications (tentative translations of the titles of works available only in Japanese)
“Theory of Justice/Theory of Liberty,” Iwanami Shoten, Publishers, 1996
“The Man Bentham,” Seidosha, Inc., 1993 (republished under the title “The Monster Bentham” by Kodansha Gakujutsu Bunko in 2012)
“A History of the Thought of Single People,” Iwanami Shoten, Publishers, 1993 Others