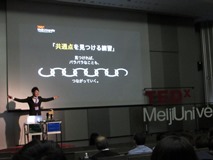 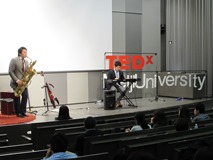 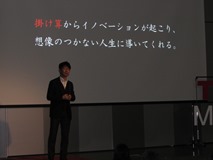 On March 20, “TEDxMeijiUniversity,” the first-ever TEDx event for Meiji University, was held at the Global Hall, in cooperation with the Meiji University Business School.
Based on the theme of “ideas worth spreading”, TEDx events are organized independently of the U.S. TED organization, which holds presentations on a wide range of genres, upon acquisition of an official license from TED. The “TEDxMeijiUniversity” event was organized and staged mainly by seven students.
The theme of this “TEDxMeijiUniversity” event was “Fusion x Chain Reaction.” There were seven speakers, consisting mainly of alumni and students of Meiji University. They included Homei Miyashita, Associate Professor of the School of Interdisciplinary Mathematical Sciences, who specializes in human-computer interaction; Hidemi Hirabayashi, Director of the Ota City Association of Sakado (tea ceremony and flower arrangement), Urasenke Chado School; Tatsunosuke Kubota, Director of Dr. Ci:Labo Co., Ltd., who oversees marketing strategy; and Soushi Matsuoka (a third-year student in the School of Political Science and Economics), who planned “MEIJIALLY WEEK,” a campaign aimed at swelling the ranks of allies supporting LBGT individuals, i.e., sexual minorities.
The capacity audience of 100 gave a resounding round of applause in reaction to the speeches and performances.
All of the beverages served at the reception were donated by the Suntory Group, thanks to the arrangements made by a Meiji University alumnus employed there. The TEDx event in the next academic year is slated to be held in November.