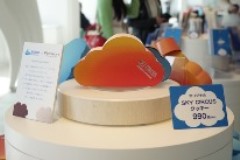 The products placed on MONOTALK in the SKY CIRCUS SHOP do their PR themselves.
Keita Watanabe, Associate Professor of Frontier Media Sciences in the Meiji University School of Interdisciplinary Mathematical Sciences, developed MONOTALK, a robotic display device that makes products appear as if they are alive and can talk. MONOTALK will be making an appearance at the Sky Circus Sunshine 60 Observatory (Toshima-ku, Tokyo), which is being renovated and will reopen on April 21 (Thu.).
Researching interaction design and design engineering, Associate Professor Watanabe is engaged in the proposal and development of interaction techniques that seamlessly fuses information technology with everyday human life.
The MONOTALK device introduced at Sky Circus Sunshine 60 is a type of presentation media. Users place an object on its turntable and talk while moving the turntable as they please. The device records the movement and speech and reproduces both just as they were recorded. People can express all sorts of things with gestures and speech. The device was developed based on the idea that it would be able to impart a strong presence and powerful expressiveness to objects by synchronizing gestures (movement) and speech. MONOTALK is characterized by the simplicity of its operation, allowing anyone to make objects on the turntable act like robots that seem alive.

>>keita-lab
>>MONOTALK (SyncPresenter)
* MONOTALK applies the SyncPresenter, which resulted from work in the ERATO Program (IGARASHI Design Interface Project) of the Japan Science and Technology Agency.

Inquiries about this research