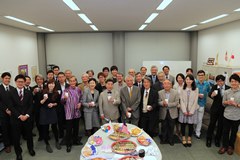 The MJIIT Alumni Association in Japan held its second general meeting and confab at the Academy Common on Surugadai Campus on May 12. The event brings together concerned personnel and students who have studied at the Malaysia-Japan International Institute of Technology (MJIIT), a high-level educational organization that was established in accordance with an agreement between the heads of state in Japan and Malaysia.
In September 2011, the MJIIT opened its doors on the campus of the Universiti Teknologi Malaysia (UTM) under the banner of developing human resources to lead Asia. Parties including other Japanese universities, the Ministry of Foreign Affairs, and the Japan International Cooperation Agency (JICA) as well as Meiji University formed a consortium and are cooperating with its operation. The MJIIT Alumni Association in Japan was instituted in October 2014 for the purpose of supporting interchange among these concerned parties and the students who study at the MJIIT.