Visit to Meiji University by a group of Korean students 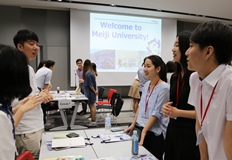 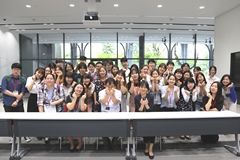 The “little heart” formed with the fingers is the standard pose for photos in Korea
The Japanese government is implementing the Japan-East Asia Network of Exchange for Students and Youths (JENESYS 2016) Program together with counterparts in other countries and regions in Asia and Oceania. As a part of this program, a group of 19 students who were selected from universities throughout the Republic of Korea were invited to come to Japan. On June 30, the group paid a visit to the Surugadai Campus for interchange with 18 Meiji University students. The group’s visit to Japan, which lasted from June 28 to July 7, took “exploration of Japanese craftsmanship and culture” as its theme. The program included firsthand experience of Japanese culture and interchange at universities in Tokyo, Shiga, Osaka, Kyoto, and other places, as well as visits to companies. This human interaction deepened mutual understanding.