Mr. Epifani, the representative who was presented with the completion certificates (School of Commerce) 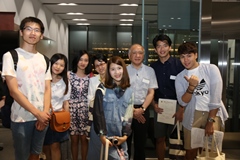