Holding of the Autumn Entrance Ceremony for the 2016 academic year 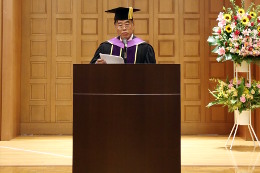 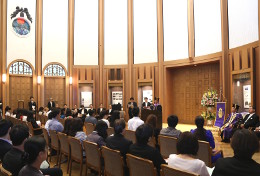 The ceremony was started by President Keiichirou Tsuchiya, welcoming the new students in his English speech. After introducing Meiji University's ongoing stance as a "welcoming utopia" for new students, the President went on to talk of his future hopes and expectations, stating that "Meiji University is a place overflowing with energy with close ties to the world of academia and sports, together with the international society. I hope that each of you, studying in this environment, will make the leap onto the world stage."

Following on from the President's address, Chairman Takashi Yanagiya gave a congratulatory speech, touching on Meiji University's foundation history, dating back 135 years, and introduced the school's founding spirit of "rights and liberty" and "independence and self-government." The Chairman, with his eyes set on the Tokyo Olympics and Paralympics to be held in four years time, encouraged the new students, saying "I hope that each of you, bearing the individuality that you will polish while here at Meiji University, will go on to be an active member of the international community, capable of understanding, respecting, and being respected by others."