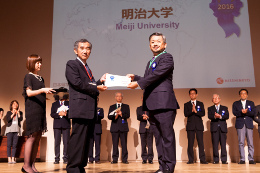 Teruhisa Komuro, Director, International Student Center (Associate Professor, School of Law; right) receiving the award
For the fifth consecutive year, Meiji University has ranked in the Nihon-Ryugaku Awards (awards that recommend universities to international students) in the University of East Japan Liberal Arts Department as a choice for recommendation by Japanese-language school teachers nationwide.
The Awards were instituted in 2012 for the purpose of contribution to conditioning of the environment for the many students in other countries who want to pursue further studies in Japan. Meiji University was nominated in two departments. In addition to the University of East Japan Liberal Arts Department, Meiji University was also nominated in the Graduate School of East Japan Department (second time in three years). Some of the reasons for being nominated were its thorough system for accepting international students, high degree of satisfaction among the students, tradition and name value, and the many students who come to Japan out of a desire to study at Meiji University.