Appointment of António Guterres, Honorary Doctorate of Meiji University, as the next UN Secretary-General 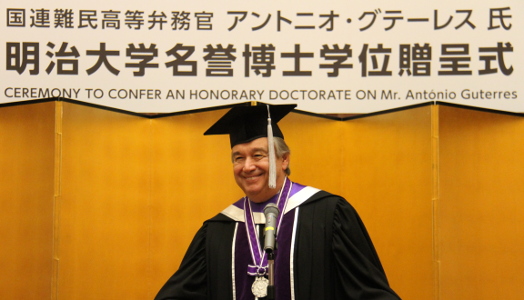 António Guterres at Meiji University in November 2014
On October 13, the United Nations (UN) General Assembly appointed António Guterres, who was bestowed with an honorary doctorate by Meiji University, to serve as the next UN Secretary-General. His tenure as Secretary-General will last for the five-year period beginning on January 1, 2017.
Born in Lisbon, Portugal in 1949, the 67-year-old Guterres was Prime Minister of Portugal over the years 1995 – 2002, and the UN High Commissioner for Refugees over the years 2005 – 2015.
Meiji University conducts recommendation-based exams for refugees, participates in the Refugee Film Festival, and is otherwise actively involved in approaches by the UN Refugee Agency (UNHCR). In November 2014, it bestowed an honorary doctorate on Guterres due to its high ratings of his social achievements and his tremendous contribution to the solution of humanitarian issues, toward the goal of world peace.