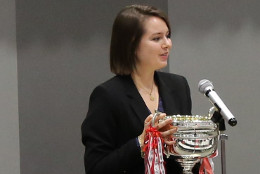 Ms. Kossowski (a third-year student in the School of Political Science and Economics) expressing her joy at receiving the President’s Prize 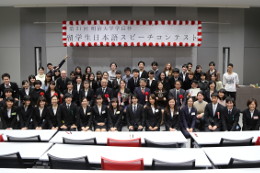 With the Japanese-language advisors and Campus Mate students
On December 10, the Japanese Language Education Center held the 21st Meiji University President’s Cup Japanese Speech Contest for International Students at the Global Front on the Surugadai Campus (with support by the Parent's Association Union and cooperation by the international exchange organization Campus Mate). The contest is held for the purpose of improving the Japanese language skills of international students and promoting their interchange with Japanese students. The theme this year was “towns in Japan and other countries that I want to tell all about.” The contest attracted the participation of 15 international students from nine countries including Italy, Australia, the Republic of Korea, and China. The international student speakers formed teams with several Japanese Meiji University students who acted as language advisors. They awaited their turn after preparing for about two months with the team. The President’s Prize, which is the top prize, was awarded to Kossowski Joanna Jeanne Annick Chantal (a third-year student from France in the School of Political Science and Economics). Her speech was titled “Paris, a City Filled with Contradictions.”
The speeches of the student entrants will be available for viewing on the Meiji University website (at a later date).

Page related to this asrticle
Back
News & Events