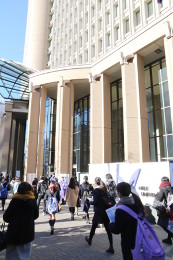 Students hurriedly heading to the exam site in the cold weather (Surugadai Campus)
The entrance exams for the 2017 academic year at Meiji University have been completed, with certain exceptions, such as the entrance examinations based on the exams conducted by the "National Center for University Entrance Examinations (second semester)". Excluding special entrance exam and admission-upon-recommendation applicants, the number of general entrance exam applicants was 112,907 as of February 9. The total number of applicants reached the 110,000 level for the first time in five years, topped 100,000 for the 11th consecutive year, and was higher than in the previous year for the third consecutive year.