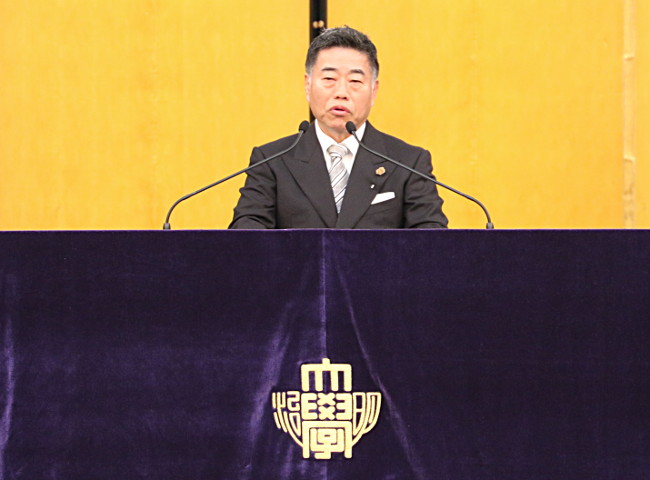 May I start by first congratulating all of our freshmen on entering Meiji University. I would also like to extend my congratulations to all their family members who are participating today. Please help us to take good care of these students during these incredible years of growth at our diverse and energetic university. I am confident that every student who surmounted the hurdles to enter Meiji University, which is the most popular “university amongst senior high school students”, will grow much more by experiencing the diversity afforded by the university.

Now let me address the students. From this moment forward, each of you will become central characters, i.e. key players, at Meiji University. This university is not simply a place that provides lectures. Nor is it somewhere that education is received passively. Here, you will be actively involved in education and research as integral components rather than passive observers, and you must throw yourself into the world to help resolve issues facing us all by sharing those issues with faculty members. This university only exists because of its student body, not the other way round.

This concept was expressed poetically by Shuji Terayama: “Drama is not performed in a theater. A theater is the place where drama happens.”

Shuji Terayama was an iconic poet in Japan. He was a standard-bearer for modern theatrical performances together with Juro Kara, who is a Meiji University graduate. Terayama was a tall man who spoke with a Tsugaru (Aomori) dialect throughout his life. I was also heavily involved with the theater some thirty years ago, so I sometimes sat at the same table. He radiated an aura as if about to ascend to heaven whenever he opened his arms. He led a theatrical group, called “Tenjo Sajiki”, and directed so-called “street-theater” performances. His performances were not presented in theaters. Instead, the street literally became his stage. Jokyo Gekijo (Situation Theater), lead by Juro Kara, a Meiji graduate who remains actively involved with the university, also dispensed with theaters, and travels the world with a red tent. Red Tent performances are held on the Meiji University campus once a year, so I am sure you will have a chance to watch it.

As I expressed earlier, Terayama’s words and Kara’s Red Tent Theater helped us to reconsider the true nature of university education. Rather than only considering the university as being a place of learning and education, instead consider wherever you are to be a place of learning and education. You are going to be the central character rather than simply a passive observer of your learning and education. In other words, you need not confine your education and research to Meiji University, but also avail yourself of other universities around the world, and the world itself is a place of education and research. Regardless of where you are, that place is your own university. Meiji University is not a red tent, but it is a camp for all of you from which to relate to the world. You can spread your wings from here across the world. In order to facilitate that, Meiji University has concluded agreements with over 200 overseas universities, and provides opportunities for students to study at those universities – not just in English-speaking regions, but also in many other regions. In a nutshell, this university is a place of opportunity.

Meiji University has initiated a 100-minute per class system from this fiscal year. This means that each class is now longer than before. This does not mean simply providing more time in class. It means that extra time has been prepared so that all of you can literally be key players to tackle various issues, pondering and discussing them with faculty members. This stimulates active learning. You may already be familiar with the term “active learning”.

Last year, I visited Nanyang Technological University in Singapore, which is an advanced country in terms of active learning. It was ranked second last year in terms of universities in Asia by a British newspaper. The National University of Singapore is ranked top. In other words, universities in Singapore are ranked first and second in Asia. Of particular interest, the active learning facilities at Nanyang Technological University have attracted worldwide attention. Their classrooms differ in shape from typical classrooms, where the lecturer stands at the front of the room. There is no fixed position for faculty members to stand. In these rooms, dialogue and discussions between the faculty members and students are made at the same level. A faculty member at Nanyang Technological University explained about the facility as follows: “Faculty members are not defined as having authority here. They are simply team leaders who address issues by considering them together with their students. Therefore, there is no podium here for the faculty member to stand on in the center. All faculty members mingle with the students and ponder these issues together. This explanation reminded me of a comment by Tatsuo Kishimoto, one of the founders of Meiji University. Meiji University was founded 136 years ago by three lawyers, who were then in their early thirties. Tatsuo Kishimoto became its first principal. During a speech he made as principal, he said,

“The education bestowed on students by Meiji University derives from their own desire to learn rather than obedience.” Education in Japan prior to the Meiji Restoration was based on obedience, as typified by temple schools (terakoya). Han schools during the Edo period were also the same. Even though the feudalistic mentality and ideas remained strong, he emphasized that Meiji University provides an education based on the students’ desire and free will, in stark contrast to the prevailing norms. He also said that faculty members can give students the key to the storehouse of knowledge, but it is up to the students to open the door.

So, the principle of active learning as explained by the faculty member at Nanyang Technological University was precisely expressed by Kishimoto as the principal over 100 years ago.

You are not simply recipients. You are the key player in your education to resolve issues by proactively sharing and discussing information. Faculty members can give you the key to open the storehouse of knowledge. But you need to open the door yourselves. We are living in an era in which the educational approach is being transformed from a feudal to a liberal system in accordance with our university philosophy. Accordingly, we already have plans to reform our education and research spaces and facilities. Meiji University will take the initiative to revamp universities in Japan into areas of both active and common learning. Both students and faculty members should proactively consider what they wish to learn or research, and tackling liberal learning and research accordingly is the Meiji University mantra that has been handed down since its foundation. I would like you to not only use this liberal campus, but also this world and the earth itself as a venue for your own education. I sincerely hope that you will all realize your unlimited potential. Meiji University offers all of you our unconditional support in line with our founders’ youthful will. Let’s move forward together. This encouragement for you marks the end of my address as president.