Agreement for Partnership and Cooperation with Hosei and Kansai Universities 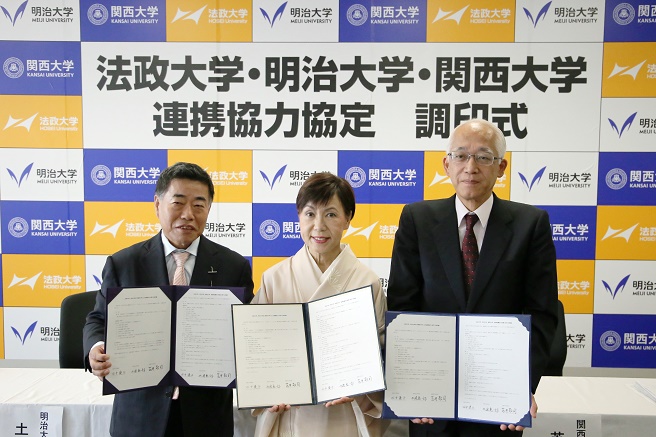 The agreement aims to further enhance the content and quality of education and research activities with the three universities partnering and working together as well as to contribute to academic advancement and the development of capable and talented human resources. In addition to education and research partnership and cooperation will cover a wide range of areas including industry-academia collaboration, contribution to local communities, and student interchange.

The signing ceremony for the partnership and cooperation agreement was held at Kansai University Tokyo Center (Chiyoda-ku, Tokyo). In his comments, Meiji University President Tsuchiya expressed his expectations for future advancement stating, “It is extremely interesting that our three universities are joining hands in pursuit of educational reform in the areas of ‘mobility’ and ‘freedom’ at a time when we are entering a new age of educational innovation. This agreement will spur the emergence of a new vision for Japanese universities in the future.”
Back
News & Events