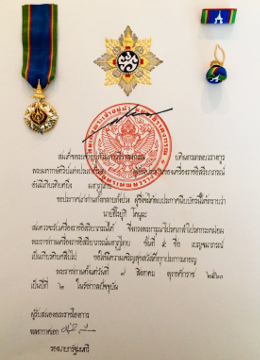 The Most Noble Order of the Crown of Thailand: medal, badge, and certificate 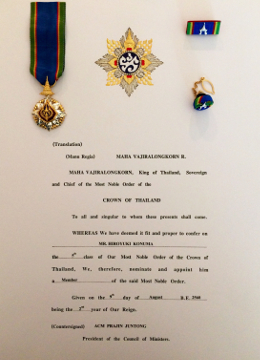 The Most Noble Order of the Crown of Thailand: medal, badge, and certificate [English Translation]

Professor Hiroyuki Konuma (a 1976 graduate of the School of Agriculture), who serves at the Office of the Organization for International Collaboration and as Director of the Meiji University ASEAN Center, was awarded the Fifth Class of The Most Noble Order of the Crown of Thailand on October 21. Created in 1869 by King Rama V, this award is bestowed on citizens of Thailand and foreign dignitaries who have made an outstanding contribution to Thailand.

Professor Konuma served at the Regional Office for Asia and the Pacific in the Food and Agriculture Organization of the United Nations (UN FAO) from 1999 to 2015. During his term at the FAO Regional Office for Asia and the Pacific, he was appointed as Deputy Regional Representative and as Regional Representative. While serving in these capacities, he also acted as the UN FAO focal point/ representative in the Kingdom of Thailand. For many years, he assisted Thailand with the tasks of promoting agriculture and improving nutrition.
Back
News & Events