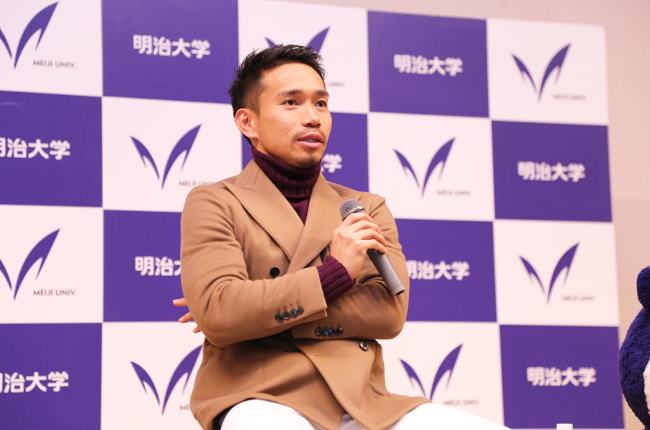 Nagatomo speaking at a talk event for Meiji University students under the theme “I want to contribute to the team’s victory.” (at Surugadai campus in January, 2018)
On May 31, The Japan Football Association (JFA) announced the final 23 players that will represent the Japan national football team in the 2018 FIFA World Cup Russia, including Meiji University alumnus Yuto Nagatomo (graduated from the School of Political Science and Economics in 2009), which would mark his third trip to the World Cup as a member of Japan national team.

After graduating from Meiji University, he played for FC Tokyo and Italian club, Internazionale Milano, and plays for Turkish Süper Lig club Galatasaray Spor Kulübü since this January where he ultimately led the team to its first league title in 3 years this past May. He has been continuously active on the international stage as a member of the Japan national team since his time at Meiji, having appeared in 100 international games with the team as of last November.

The 2018 World Cup Russia will kick off on June 15, with Japan national team playing Colombia (June 19), Senegal (June 25), and Poland (June 28) in the group stage (all dates are in JST). Along with the performance of the Japan National Team, attention will also be on how Nagatomo performs in his third World Cup.