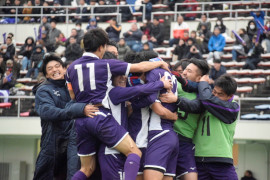 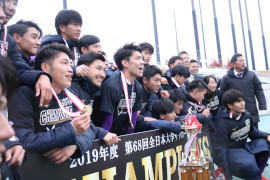 The tournament is played between the top teams from each of Japan’s regional leagues (24 teams in total). Meiji University had placed first in the Kanto region. In the final on December 22, Meiji University beat Toin University of Yokohama 3-1.

Not only was it the Football Club’s first victory in the All Japan University Football Tournament (intercollegiate competition) in ten years and its third in the tournament overall, but the win also marks the club’s fourth title* this season, giving it a new place in the annals of university football.