(Tokyo, September 25) Scientists at Meiji University, Hosei University, and Tokyo Institute of Technology (Tokyo Tech) aimed to better understand the homeostasis of pyruvate, a key connection point of many metabolic pathways in Escherichia coli bacteria. Scientists focused on a transcription factor called PdhR because it regulates pyruvate breakdown into other molecules. They identified ~20 genes that PdhR targets, and showed their involvement in pathways connected to pyruvate.

Organisms, ranging from bacteria to humans, run on an interconnected series of metabolic pathways—with glycolysis being the essential process that generates energy from sugars (glucose) in food. Pyruvate is the final product of glycolysis: it is an important molecule that acts as a node between different pathways (Figure 1). To better understand how these pathways work, a team of scientists, led by Dr Tomohiro Shimada from Meiji University and including Dr Akira Ishihama from Hosei University and Dr Sousuke Imamura from Tokyo Institute of Technology (Tokyo Tech), decided to investigate a protein called “PdhR,” the master regulator of pyruvate catabolism (or breakdown) in Escherichia coli (a common model organism). They knew from previous research that PdhR regulates the expression of at least nine proteins involved in carbon metabolism pathways (breakdown of sugars into energy sources). But, given the many roles of pyruvate from scavenging free radicals to generating amino acids, it was logical to think PdhR had multiple targets.

Researchers used a process called gSELEX (Genomic SELEX) screening, in which PdhR is mixed with small pieces of E. coli genome. PdhR was tagged with a marker that allowed researchers to isolate the targets of PdhR. This led to the successful identification of multiple targets of PdhR. “We were able to find 16–27 possible targets of PdhR this way,” Dr Shimada explained. “And from these, we decided to analyze the ones that had never been identified before. The goal was to find new pathways involving PdhR.”

The team identified PdhR regulatory targets that were involved in bacterial movement, specifically acting as a repressor of genes affecting flagella (the appendage that many bacteria use to move). They also found that PdhR regulated breakdown of fatty acids (an important energy source in bacteria) by suppressing a protein that inhibits this process. In other words, active PdhR decreases bacterial mobility and increases fatty acid degradation—functions of PdhR that are completely novel. Moreover, the scientists also identified other carbon-metabolism genes regulated by PdhR, including enzymes that produces pyruvate during glycolysis, lactate metabolism, and TCA cycle.

The scientists are optimistic that these findings from E. coli can be applied to more complex, multicellular animals. They could also help us to better manipulate E. coli metabolism, which has important implications for bioengineering and molecular biology experiments.” Dr Shimada concludes, “Our work allowed us to expand the role of PdhR beyond what was already known. Because pyruvate concentrations influence PdhR activity, these results really helps us better understand the critical central role of pyruvate in E. coli metabolism. E. coli is an extremely common bacteria, and understanding it can lead to significant insights into the medical field.” 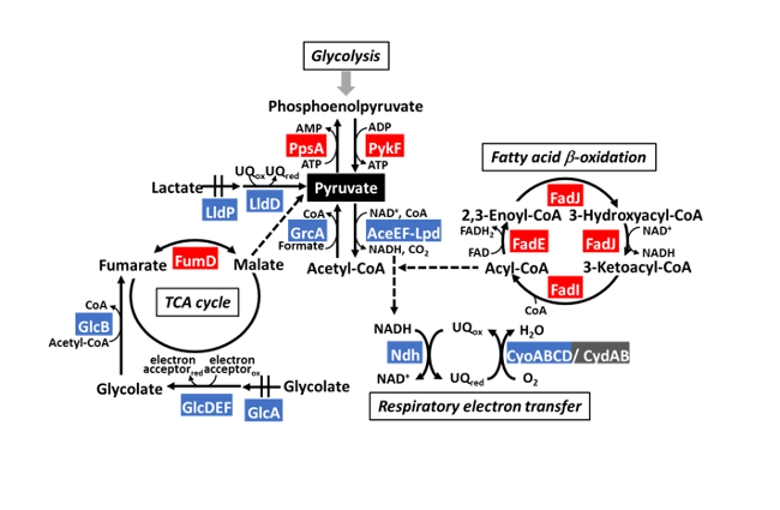