[Press Release] At the Root of the Problem: How Plant Hormones Can Help Us Fight Parasitic Plants 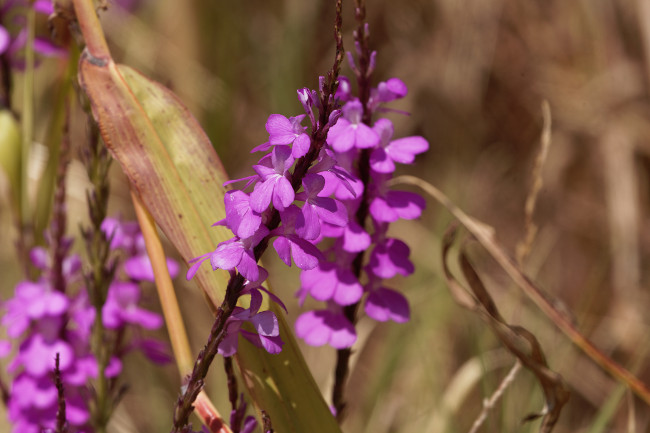 Root parasitic plants such as Striga hermonthica can be devastating to many types of major crops
and finding efficient ways to control them is crucial to secure our food sources.
Photo source: Shutterstock

Root parasitic plants latch onto the roots of major edible crops and siphon out nutrients and water, killing them and causing multibillion-dollar losses. To control these parasites, scientists at Meiji University are researching strigolactones, a family of plant hormones, and compounds with similar effects. Their most recent findings shed light onto the molecular mechanisms by which root parasitic plants react to strigolactones and pave the way to inexpensive synthetic chemicals to destroy them.

Plants, like us and other animals, produce hormones to regulate their growth and interact with their environment. Our understanding of plant hormones has helped us develop several strategies to boost the production of major crops, including rice, millet, and maize. However, we are not the only ones manipulating plant hormones to our advantage.

Several species of root parasitic plants, such as Striga and Orobanche, rely on plant hormones called strigolactones (SLs). The tiny seeds of these parasitic plants can lie dormant for decades until a nearby host plant secretes SLs into the soil, causing the seeds to germinate. Then, the parasitic plant’s roots latch onto the host’s roots and siphon water and nutrients, slowly killing the infected plant. This interaction poses a major threat to crops worldwide and has particularly devastating effects in Africa, where losses are estimated at about nine billion USD per year.

At Meiji University, Japan, Associate Professor SETO Yoshiya and colleagues are hoping to spark the next green revolution by observing the molecular mechanisms by which SLs affect both crops and parasitic plants. SL can and has been used against root parasitic plants; by spraying an infected field with such chemicals when no crops are present, the seeds of parasitic plants are forced to germinate without a suitable host plant nearby, leading to their quick death. This strategy, called suicidal germination, is an effective way of cleansing infected fields. However, mass-producing SLs or its analogs is rather expensive.

Dr. Seto and his team tackled this issue by focusing on various SL-unrelated chemicals with SL-like effects, in order to find useful molecules that can be produced en masse in bacterial or fungal cultures. In their most recent study, published in Bioorganic & Medicinal Chemistry Letters, the team analyzed the effects of tryptones, a major component of microbial culture broths, on the germination and growth of Orobanche minor, a root parasitic plant introduced to Japan a few decades ago.

The researchers first analyzed the chemicals in tryptone using liquid chromatography. They identified the germination-inhibiting compound to be a simple amino acid, L-tryptophan (L-Trp), and assessed the effect of several commercially available L-Trp-related chemicals on O. minor seeds. To their surprise, they found that while most of these chemicals inhibited seed germination, a few of them actually induced it. “Some of the chemicals we analyzed, which are not structurally related to SLs, represent good leads for the development of new classes of suicidal germination inducers,” remarks Dr. Seto.

However, the team did not stop there; they wanted something even better! They knew two facts from previous studies. First, certain germination-inhibiting chemicals also inhibit the growth of the primary parasitic plant roots. Second, the germination-inducing activity of SLs is strongly related to one specific part of their molecular structure called the ‘D-ring.’ The researchers added a D-ring to indole-3-acetic acid, an L-Trp-derived plant hormone, auxin. The resulting hybrid compound had the unusual property of both inducing germination and inhibiting primary root growth in O. minor. “This was the first hybrid compound with both types of activity, and it may be possible to use it to induce suicidal germination of parasitic plants even if crops are present!” explains Dr. Seto.

The findings of this study provide much needed insight into the chemical mechanisms of how SLs and related chemicals work. They also pave the way to more inexpensive alternatives to help combat root parasitic plants. While O. minor has not yet caused major crop damages, the molecules discovered in this work should also affect other parasitic species such as Striga hermonthica, which is responsible for multi-million-dollar losses due to crop damage in sub-Saharan Africa. Dr Seto hopes his research sparks more interest in plant hormone research, which could change the fate of humanity by preventing major food shortages and reducing food costs.


About Associate Professor SETO Yoshiya
SETO Yoshiya obtained a Ph.D. in Agriculture from Hokkaido University, Japan, in 2009. He became a full-time lecturer at Meiji University, Japan, in 2018. He now leads the Biological Chemistry Laboratory as an Associate Professor. His current specialties are bioorganic chemistry and chemical biology, with a specific interest in plant hormones, like strigolactones, that control plant growth. He has over 30 peer-reviewed publications to his name and strongly believes that plant hormone research will be crucial to prevent food-related catastrophes.

[Discovering the hidden power of plants that saves us from human crises]
https://youtu.be/FIFHIl9rOZw