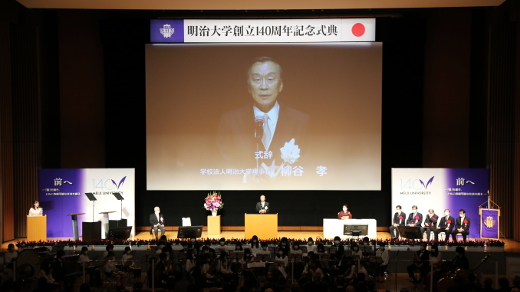 Chairman, Board of Trustees Yanagiya delivering a speech 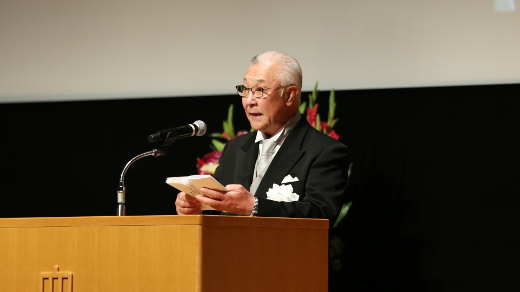 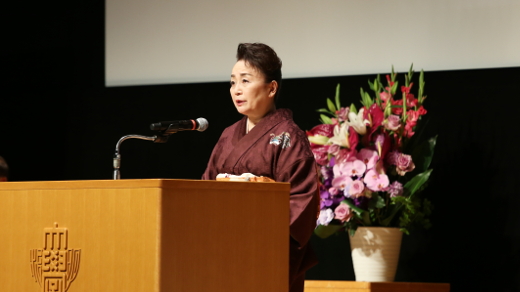 H. I. H. Princess Tomohito of Mikasa, made a congratulatory address 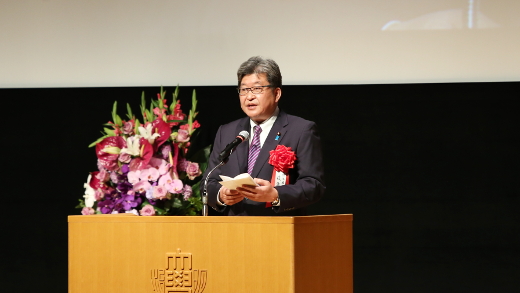 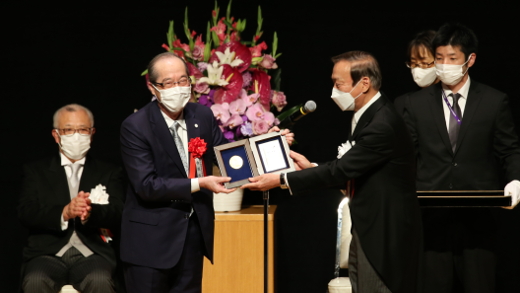 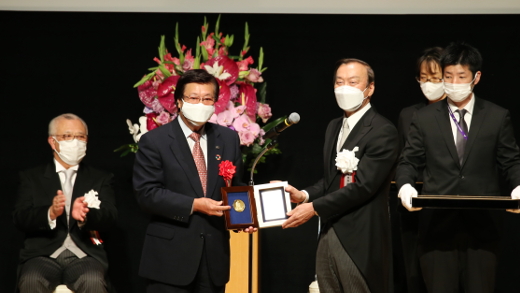 Chairman, Board of Trustees Yanagiya and President Dairokuno announced the next long-term vision 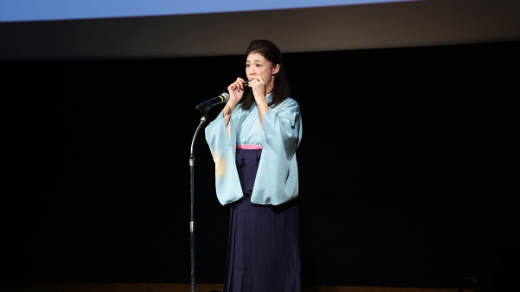 First, Chairman, Board of Trustees Takashi Yanagiya and President Kosaku Dairokuno gave their speeches on behalf of the university, remembering each of the three founders (Tatsuo Kishimoto, Kozo Miyagi, and Misao Yashiro) who founded Meiji Law School 140 years ago.

Regarding the announcement of the MEIJI VISION 150 – Go Forward –, the second long-term vision for the university’s 150th anniversary, Chairman, Board of Trustees Yanagiya said, “We will strive to achieve our vision to continue to play an active part in the future as a top university and as a hub of Asia in the 21st century.”

President Dairokuno recalled, “When Meiji University has faced its numerous difficulties and crises, university officials have acted in the same spirit of “harmonious cooperation” and embodied the philosophies of Rights and Liberty, Independence and Self-Government.” The President also expressed hope for the future, “We will cultivate students to be “Thinkers” capable of confronting the global problems with the spirit of ‘Go Forward’ to open up your own situation and to be “Doers,” practitioners capable of implementing their ideas in society, and will send such students out to the various areas of society.”

Following this, Her Imperial Highness Princess Tomohito of Mikasa, gave a congratulatory address. H. I. H. Princess Tomohito of Mikasa said that she was invited to the ceremony by Chairman, Board of Trustees Yanagiya, because she had watched the National Rugby Football Championship in January 2019. She also said, “I am confident that Meiji University graduates will continue to play active roles in many fields, including the business community, and that the University will cultivate a variety of individuals, uphold the spirit of ‘Go Forward’ and send out talented people with the wisdom to face various challenges to the international community."

In addition, the following guests made congratulatory speeches as representatives: Shinsuke Suematsu, Minister of Education, Culture, Sports, Science and Technology (Hiroshi Yoshimoto, Vice Minister of Education, Culture, Sports, Science and Technology read it on behalf of the Minister), Koichi Hagiuda, Minister of Economy, Trade and Industry, and Aiji Tanaka, President of Waseda University and President of the Japan Association of Private Universities and Colleges. A congratulatory telegram from Mr. Tomiichi Murayama, the 81st Prime Minister and the Chairman Emeritus of the Meiji University Alumni Association, read “I hope that Meiji University will carve out an even more glorious history based on its 140-year tradition.”

At the ceremony, awards were given to four individuals and seven organizations. As each representative, Mr. Masao Mukaidono, the former Chairman and the Chairman Emeritus of the Alumni Association, and Rengo Sundai-Kai were presented with commendation certificates and commemorative gifts.

Following this, Chairman, Board of Trustees Yanagiya, and President Dairokuno announced the MEIJI VISION 150 – Go Forward –, the next long-term vision. Prior to the announcement of the Vision, Yuji Mitsuya, a voice actor, multi-creator and alumnus of the University, and Noriko Hidaka, a voice actor, actress and a parent of a graduate of Meiji University, narrated videos summarizing the 10 years of progress since the 130th anniversary.

Chairman, Board of Trustees Yanagiya and President Dairokuno introduced the vision for the next 10 years based on five items, and said lastly, “With the spirit of Rights and Liberty, Independence and Self-Government, Meiji University aims to be an educational and research center that creates a peaceful and sustainable society in which people can live as human beings.” (President Dairokuno), and “Meiji University will work on concrete measures to realize the vision and policy from 2022. As we approach our 150th anniversary, I hereby declare that we will continue to advance ‘Go Forward’ without stopping, no matter what difficulties we face.”