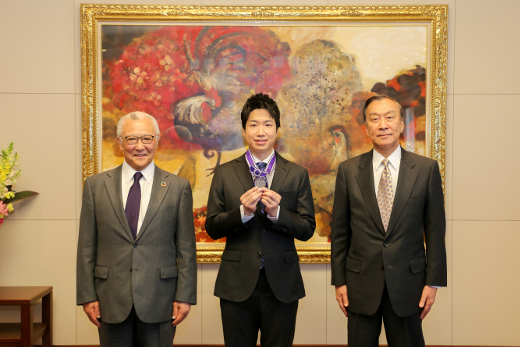 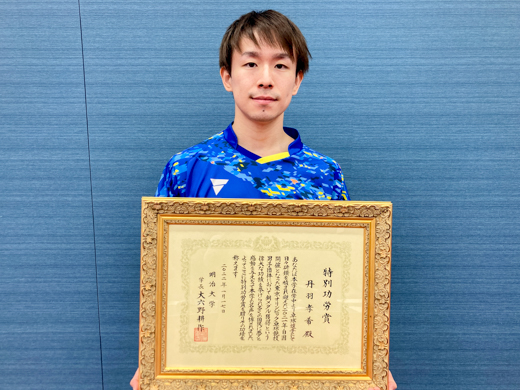 Niwa shared photos with his comments 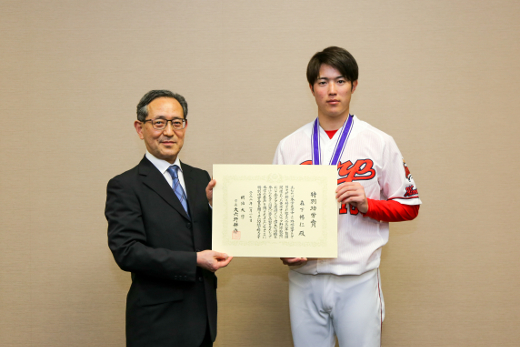 They won medals at the 32nd Olympic Games (Tokyo 2020 Olympic Games) held in July-August 2021. In recognition of their achievements, they received the Lifetime Achievement Award.

Mizutani was the ace of the table tennis club during his time at the university, winning the 2009 All Japan Students Table Tennis Championships in men’s singles as well as contributing to the team event. He competed in international competitions at the 2008 Beijing Olympics and 2012 London Olympics. At the 2016 Rio Olympics, he was the first Japanese to win a medal in the men’s singles, a bronze medal, and he also won a silver medal in the men's team. Moreover, he won the mixed doubles at the 2021 Tokyo Olympics, bringing Japan's first gold medal in table tennis.

Niwa won the 2013 All Japan University Championships in the men’s singles and made a significant contribution to the team event during his time at the university. He won many medals in international competitions such as the World Table Tennis Championships. At the 2016 Rio Olympics, he won a silver medal in the men's team as a student at Meiji University. He also won the third-place match in the men’s team at the 2021 Tokyo Olympics, and greatly contributed to winning the bronze medal.

Morishita was a pitcher in the baseball club during his time at the university. He won 15 games in total in the Tokyo Big Six University Baseball League game and contributed to three league championships throughout spring and autumn. Meiji University won the 2019 All Japan University Baseball Championship for the first time in 38 years, and he received both the Most Valuable Player Award and the Best Pitcher Award. He was the first pick for the Hiroshima Toyo Carp in the professional baseball draft and joined the team. He won the Rookie of the Year award in 2020. At the 2021 Tokyo Olympics, he was a starter in the final against the United States and became the winning pitcher, greatly contributing to taking gold.

They accepted the certificates and commemorative medals on separate days. On March 3, Mizutani visited the university and received the certificate and medal from Chairman, Board of Trustees Takashi Yanagiya, and President Kosaku Dairokuno in the VIP room of the Liberty Tower, Surugadai Campus. Mizutani said, “I have worked very hard chasing the achievements of our great seniors of Meiji University. I’m happy if I’m a little bit closer to them. I will keep working hard to pass them someday. Thank you so much for this prestigious award.”

Niwa accepted the certificate and medal by mail. He sent a comment, "I am very honored and happy to receive this award as a graduate. I will continue to play each and every game to give you a good report. Thank you so much for your support.”

On March 16, Vice President (Sports Promotion) Harufumi Nishiyama, Professor, School of Commerce presented the certificate and medal to Morishita. He said, "This is the prestigious award that Senichi Hoshino (graduated from the School of Political Science and Economics in 1969) also received. I will continue to do my best to be known as a representative player of Meiji University.”

Meiji University Lifetime Achievement Award
The award is presented to individuals and organizations selected from among students, faculty members, alumni (alumni and alumnae) at Meiji University, who have made outstanding achievements in the fields of academic, culture, sports, etc., and who are recognized as having contributed to the promotion and development of education and research at Meiji University. This award has been presented to You Aku, Senichi Hoshino and Takeshi Kitano. Mizutani, Niwa and Morishita are the 34th, 35th and 36th recipients.