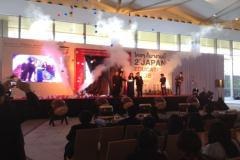 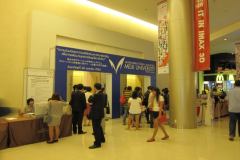 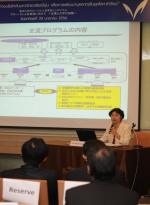 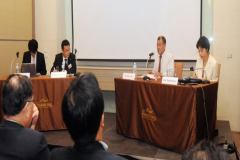 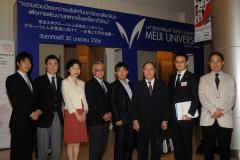 Group photo of lecturers and panelists

The Meiji University International Student Exchange Center held the Meiji University Global Human Resource Development Symposium titled “Toward Global Human Resource Development -Collaboration between Industry and Universities-” on Sunday, January 20, 2013 in Bangkok, Thailand.
The symposium was one of the events organized for the second Studying Abroad in Japan/Japanese Companies Job Fair held on Saturday, January 19 and Sunday, January 20, 2013, jointly hosted by the Japanese Chamber of Commerce, Bangkok, the Japan Student Services Organization, the Japan Foundation, Bangkok and J-EDUCATION. Further, the symposium was held as a pre-event for the opening of the “ASEAN Center (provisional name)” which is scheduled to be opened in April 2013.

Approximately 240 people, including university officials and those interested in studying in Japan or working for Japanese companies, visited the symposium venue. Many people also stopped in front of the monitor showing a live broadcast of the symposium and listened to the lecturers’ speeches with keen interest.
While Mr. Hideki Eto, Director of the Japanese Language Education Center, acted as overall master of ceremonies, University Vice President Etsuko Katsu made an opening speech on behalf of the host organizations and expressed her expectations with regard to industry and university collaboration for human resource development.

In the first part of the symposium, under the theme of “Types of Personnel Needed in Japanese Companies Both in Japan and Thailand”, Mr. Krisada Visavateeranon (Chancellor of the Thai-Nichi Institute of Technology) made a keynote speech entitled “Human Resource for Japanese Enterprise in Thailand”. In the speech, he talked about the investment status of Japanese companies in Thailand and also described types of local personnel needed by Japanese companies operating in Thailand, while introducing some of the activities promoted by the Thai-Nichi Institute of Technology.
Subsequently, Mr. Mitsuhiro Takayanagi (General Manager, Human Resource & Planning Group, Panasonic Management (Thailand) Co., Ltd.) made a speech entitled “Toward Transformation as a “True Global Company” that Can Survive in the World: Globalization of Japanese Companies and Required Human Resources – the Panasonic Case” and spoke about Panasonic’s global strategies, personnel policies to realize the strategies and required human resources for the purpose.

In the panel discussion held in the second part of the symposium, three panelists made presentations and had a discussion on the theme of “Collaboration between Japanese Companies and Universities for Human Resource Development”.

First of all, Mr. Daisuke Nagayasu (Manager, Human Resources, Mitsubishi Electric Corporation Asia Corporate Office (Thailand)) explained the status of personnel policies of the Mitsubishi Electric Corporation Asia Corporate Office and types of personnel required there.
Then, Mr. Masao Saito (Full-time Lecturer at Japanese Language Department, Faculty of Humanities, University of the Thai Chamber of Commerce) made a presentation on the status and issues of Japanese language education in Thailand and talked about how it should be in the future.
Lastly, University Vice President Etsuko Katsu (in charge of international exchanges) spoke about the global human resource development initiatives being promoted at Meiji University.

In the discussion, Associate Professor Takashi Sekiyama (Organization for International Collaboration) played a role as a moderator and three panelists described to students from Thailand the type of personnel that are required, discussed with the other panelists methods for making requests and collaboration, and further debated various methods of cooperation and collaboration to promote global human resource development.

In the Japanese Job Hunting Seminar held in the third part of the symposium, on the theme of “Employment Situation of Foreign Students in Japan and Employment Support Activities by the University”, first of all, Professor Emeritus Kosaku Dairokuno (Dean of the School of Political Science and Economics) explained what kind of education was provided to foreign students after they had come to study in Japan and what kind of job hunting activities they were doing in Japan. He mainly talked about activities taking place at the School of Political Science and Economics and described the content of support available for all the students, including foreign students, from the time of entering university until they found a job. Then, Mr. Tatsuya Kodaira (President of Japan Active Solutions) spoke about the employment situation of foreign students with Japanese companies in Japan and also about university employment support activities tailored for foreign students.