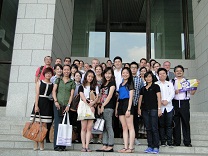 Field trip to the Supreme Court 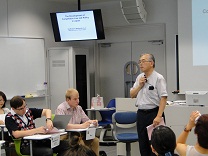 Many opinions were actively given during the lectures 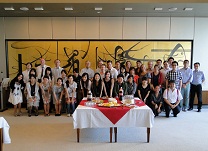 Smiling faces at the farewell party
The 2013 Meiji University Law in Japan Program, a summer short-term program to teach the basics of Japanese law and legal systems in English, ended on August 9.

This year, 25 students and working adults from a variety of regions including the United Kingdom, Germany, France, Italy, Austria, Poland, the United States, Canada, Mexico, Australia, New Zealand, Thailand, and China participated in the program. Five students from the Meiji University School of Law also participated, for a total of 30 participants.

Question and answer sessions were provided in the lectures as necessary, and students actively asked questions and gave their opinions. Many of the questions and opinions involved comparisons with the laws and legal systems of the students’ countries, and we feel that we reached the objective of having students understand an outline of Japanese laws and legal systems.

Field trips were also made to the Supreme Court, Tokyo District Court, Tokyo Summary Court, Haneda Airport District Immigration Office of the Tokyo Regional Immigration Bureau, Higashi-Nihon Immigration Center, Legislative Bureau of the House of Representatives, a corporate legal department, and a law firm. These visits were designed to make the knowledge learned in lectures more concrete and enriching.

Lectures and Q&A sessions were held at the field trip sites by the representatives of those sites. In that way, participants could gain deeper understanding of the worksites for judicial, legislative and administrative procedures of Japanese law as well as those for corporate legal activities.

The participants asked questions with particular enthusiasm about Japan’s criminal and civil trial work and the lay judge system after observing district and summary court procedures for which they expressed high interest and satisfaction.

On the final day, completion certificates were presented and a farewell party was held and participants, lecturers and program assistants reminisced about their experiences in the program.

The School of Law plans to hold the Meiji University Law in Japan Program again in summer of 2014.