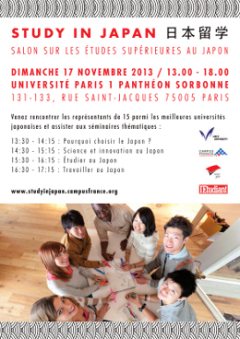 Meiji University will hold the “Study in Japan Fair in Paris 2013” at Université Paris 1 Panthéon-Sorbonne, Centre Panthéon. In the context of France, Meiji University had been the chair of Consortium japonais du Collège doctoral franco-japonais that was ended in 2010. The Fair is held to further promote student and academic exchange between Japan and France in collaboration with Campus France for the first time in Paris.

15 universities from Global 30 universities as well as some of member universities of the Consortium will participate in the fair in order to provide prospective students with information such as Japanese higher education system, entrance exams and scholarships. In addition, several seminars for French students will be offered.

Next day of the Fair, the French-Japanese academic meetings will also be held organized by Conférence des présidents d'université (CPU).

Please refer to the following website for details and registration.
http://studyinjapan.campusfrance.org