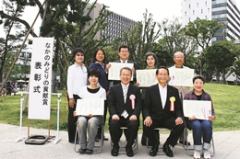 With Ward Supervisor Tanaka (front left 2) at the Nakano Campus in commemoration of receiving the award
The Nakano Campus, which opened this April as Meiji University’s fourth campus, won the Nakano “Green Contribution Award” (Green Contribution Commercial Category).
This award, currently in its second year, is presented in five categories to individuals and groups that have achieved success in activities to promote and maintain green areas, by Nakano Ward as part of efforts to prevent global warming. The Nakano Campus was praised for its visionary approach to realizing green areas as the new face of the Nakano Ward. In partiular, the fact that the green walls and open space are highly visible to Ward residents, the enriching effect of the green, and hopes for the growth of trees and flower over the years were the reasons for receiving the award.