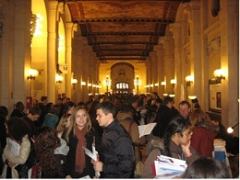 The Study in Japan fair 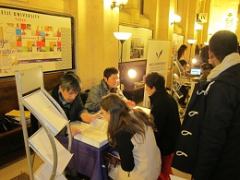 Consulting at a booth 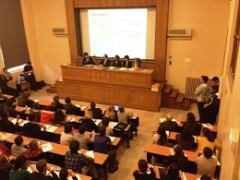 A seminar at the Centre Panthéon

A seminar at the Centre Panthéon 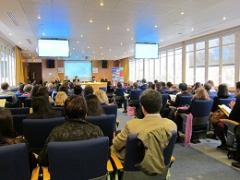 This “Study in Japan Fair in Paris 2013” was held as part of a project to create hubs for internationalization (Global 30 project), aiming to further encourage academic exchange between Japan and France by disseminating information widely on research and educational activities at Japanese universities, entrance exams, and scholarships for studying in Japan, to high school and university students and others interested in studying in Japan.

At the fair, 17 universities (of which two participated with materials) including Global 30 member universities, the Ambassade du Japon en France, and the Maison de la culture du Japon à Paris set up booths to talk with earnest visitors with questions. The booths attracted many visitors, with visitors making long lines for some of the booths.

At the seminar which was held in the Centre Panthéon, following four sessions were held: 1 Why choose Japan?, 2 Technology and innovation in Japan, 3 Studying in Japan, and 4 Working in Japan. At each session, there were lectures by government and university officials about Japan and the attraction of studying in Japan, research and educational activities at Japanese universities, entrance exams, scholarships, etc., as well as talks from graduates and university students who have studied in Japan about their experiences. The Centre Panthéon was packed at all times with visitors. There was active interaction between the lecturers and audience, indicating the high level of interest of the visitors in studying in Japan.

There were comments from the visitors such as “I was really glad to be able to hear stories about studying in Japan today. I was also able to hear about Japanese universities directly, and it was a great opportunity. I definitely want to study in Japan.”

Additionally, the day after the fair (November 18), French-Japanese Academic Meetings were held, hosted by the Conférence des Présidents d’Universités (CPU) and Campus France and co-hosted by Meiji University. With the attendance of the President of the CPU, director-class officials from the French Ministry of Foreign Affairs and Ministry of Education, officials from the Ambassade du Japon en France, 12 Japanese universities, and 38 French universities participated in lectures and matching sessions to deepen exchanges.