Hoshino Gen and Aragaki Yui got married on May 19th.   It is so-called “Nigehaji-kon”.  People all over Japan blessed them.  On the other hand, many people were depressed by the so-called “Gacky shock”.  Meanwhile, concerns were expressed in unexpected places by “Gacky shock”.   It is a stock price. Because when a popular celebrity gets married, the stock price plummets.   For example, at the time of Kitagawa Keiko, the Nikkei Stock Average fell by 479 yen, and at the time of Fukuyama Masaharu, the stock price fell by 300 yen.   However, it was Bitcoin that was affected.  It seems that the value of Bitcoin has dropped by 30%. For fans, after all it seems to be quite important whether a popular celebrity is single or not.  Who will cause the next “Shock”?

One day, I was watching YouTube when I was riding the train.  Then, YouTube recommended me a video.  It was the video named “Tendon man Solo”.  I was very interested. “Tendon man” is a character that appears in “Anpan man”.  I touched the screen and started watching the video. Then, “Tendon man” singing and dancing rhythmically alone in a square with a few people was reflected.  He was singing “Tenten, Dondon, Ten, Dondon".  I couldn’t bear the laughter, and I was looked by the passengers around me.  I was embarrassed, but that rhythm didn’t stop.  This situation was amazingly funny.  You shouldn't watch the funny video on the train.

My treasure, my friend and my family

I have a brother, who will enter Junior high school next year.  He will be 12 years old this year, so we have lived together since I was six.  He has black hair, four legs and a tail.  Yes, he is a dog.  When I get home, he always says, “cumm,cumm” and starts to run with shaking his tail.  And he always follows me when I go to my room. Several years ago, when I was crying, he came and slept by me.  I can’t imagine the world without him.  Dogs always bring happy life to human, I hope that I will continue to live with him forever.

What is my wish?

May 18th was my birthday.  I became 18 years old.  On that day, my father gave me a present.  That says “I will make your wish come true“ ticket.  Anything!! I thought hard about what to get.  I want to go on family vacation, it’s time to buy a new wallet, I want a cute bag and clothes, I’ve been thinking about wireless earphones lately.  I wondered what my wish was.  I can only ask my father for what I really want ——It hit me. I had overlooked an important thing.  There was only one wish serious to me, to our family.  I called my father.  He asked me in a carefree manner what happened. I told him sternly, “About the ticket, I want you to lose weight.”

I’m saving luck now.  Have you had a lucky day?  Yesterday was undoubtedly a lucky day for me.  I bought juice at a vending machine.  It has a number slot, and if it displays the same numbers, I can get another drink.  I put money, pushed the button, and watched the slot.  Surprisingly, it showed 777.  But I didn’t need a drink anymore, so I gave it to my friend.  However, today is unlucky day.  I can’t win rock-paper-scissors.  I used all my luck yesterday.  So, I’m saving luck, and hoping I’ll be lucky next week.

There is a hero in my house

There is a spider in my house.  Every year, I find it and it makes me smile.  This year, I found it and it reminded me of one story.

About 10 years ago, my mother heard my sister crying and she rushed to my sister. Then my sister stood on a table and she shouted, “A Spider-Man!  There is a Spider-Man!!” My mother was surprised and imagined a man like a movie star.  Then she looked around.  Finally, there wasn’t a Spider-Man.  There was only a small spider!  Since then, a spider has been a reminder of this story in my house.  When someone finds it, he or she in my house would say “There is a Spider-Man!”

The swallow couple at Yanokuchi station

I use Yanokuchi station every day.  Many people use it when they go to school.  But recently, there are animals other than people who use this station.

They built a nest in it.  Their illustrations are also displayed on the electric bulletin board at the station along with the warm message of the station staff.  “They are working hard to raise their children.”  In Japan, it is said that if they are flying low, it will rain.

Do you know what animal they are?  The answer is swallows!  I wish they leave the nest safely.

Do you know the famous rugby player, Mr.Fukuoka?  His retirement game was held on May 23.  His strength is his speed.  He’s been selected to represent Japan.  His team won 31-26.  He had no regrets, and he seemed satisfied.  He is going to be a doctor. I think he worked extremely hard so that he could balance playing rugby and studying about medicine.  If we have two dreams, most of us will give up one to realize the other.  I’m impressed by him and I look forward to his success in his new field.

What I have put up with

I belong to the brass band club.  We held a concert for new students in club activities. The audience gave a big applause after the performance.  The practice time was short and I was impatient, but I’m glad I succeeded.

The reason for the reduced practice time is that the COVID-19 infection has spread. Last year we could only have concerts without audience.  From now on, I would like parents as well as new students to listen to the performance directly. 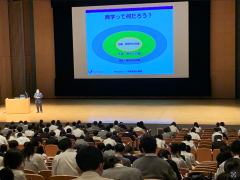 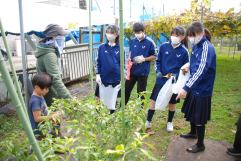 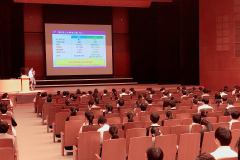