Visit from the Ambassador of the Republic of Serbia to Japan 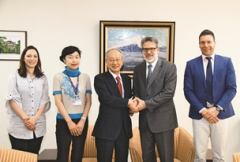 (From the second on the right) Ambassador Glišić, President Fukumiya, Vice President Katsu
Mr. Nenad Glišić, Ambassador of the Republic of Serbia to Japan, visited the Surugadai Campus on April 2 and discussed about academic exchanges in the dean’s office with Meiji University President Kenichi Fukumiya and Vice President (in charge of international exchange) Etsuko Katsu.

Meiji University and the University of Belgrade in Serbia’s capital have been participating in student exchanges since entering an interuniversity agreement in 2009.