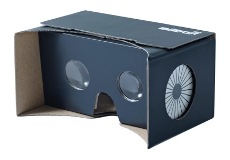 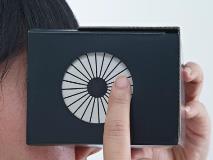 The circular part is the touch interface. 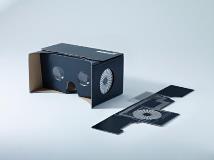 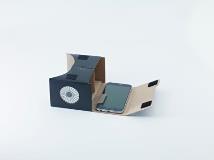 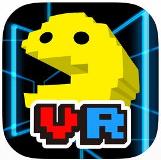 Application icon
[School of Interdisciplinary Mathematical Sciences] Launch of Sales of Touch-Interface Smartphone VR Goggles and a Related Application
- Joint development by a group led by Dr. Homei Miyashita -
A group that was led by Dr. Homei Miyashita, Professor of the School of Interdisciplinary Mathematical Sciences, and included Kunihiro Kato, a doctoral candidate in the Graduate School of Science and Technology, who is also a special researcher attached to the Japan Society for the Promotion of Science, developed virtual reality (VR) goggles and a related game application together with WHITE Incorporated (headquarters: Meguro Ward, Tokyo). Named “Milbox Touch,” the goggles are made of cardboard and mounted with a touch interface. The application is “Milbox Touch ver. VR PAC-MAN”. Both will be marketed by the company on April 26 (Tues.).

■MilboxTouch
Milbox Touch is the name of the VR goggles with smartphone attachment, mounted with a touch interface module applying extension sticker technology, one of the fruits of research at Meiji University. The touch interface module is printed on the side of the Milbox Touch case with conductive ink. By touching this module, the user can perform tap, scroll, and swipe operations on the smartphone attached to the inside of the goggles.
Former VR goggles with smartphones attached could only be “operated by shaking the head”. Milbox Touch, in contrast, enables operation of a touch interface with the fingers. The team succeeded in greatly widening the range of VR visual and game experience. Milbox Touch is the world’s first type of smartphone VR goggles allowing users to make input from the outside (*according to a survey by the company).
Milbox Touch was selected for the list of finalists in both the SXSW and the Microsoft Innovation Award, and won the Tech in Asia Prize. (April 23 (Sat.))

* For more details, see the page (product website) below.
http://milbox.tokyo/milboxtouch/index_en.html