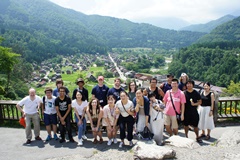 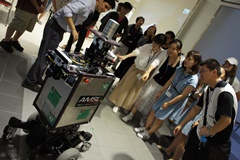 Showing keen interest in the robots at the Kuroda Laboratory on the Ikuta Campus
Organization for International Collaboration held the Cool Japan Summer Program 2016 from July 20 to August 5. This is a short-term study-abroad program whose participants learn about Japan’s pop culture and other aspects of its contemporary culture as well as the tea ceremony and other elements of traditional culture, through classroom instruction, workshops, and field trips.
The program was designed for university and graduate school students residing outside Japan, and was promoted under the banner “Discover Your Cool Japan at Meiji University.” It began in 2010 as an attempt to attract students in other countries for study in Japan. In this, the seventh installment, it attracted 18 participants from a total of 8 countries and regions, including the United States, Canada, the United Kingdom, France, China, and the Philippines.