Shiori Hirata, Japan’s representative in shooting at the Tokyo 2020 Olympic Games makes a courtesy call on the President and Chairman, Board of Trustees 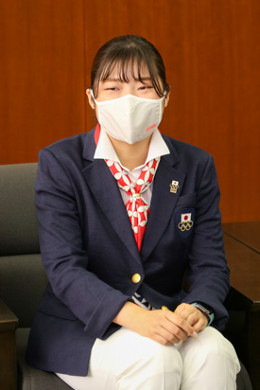 Hirata reflecting on her efforts at the Olympics 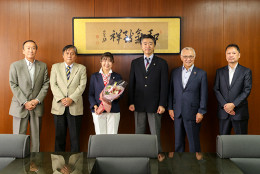 
On September 24, Shiori Hirata (4th year in the School of Political Science and Economics) of the Shooting Club who represented Japan at the Tokyo 2020 Olympic Games visited President Dairokuno and Chairman, Board of Trustees Yanagiya to report on her participation in the Olympics.

Hirata took part in three shooting events. She competed valiantly against the world’s top athletes, taking 34th place in the individual women’s 10m air rifle event, 26th place in the mixed 10m air rifle event and 11th place in the individual women’s 50m 3-positions rifle event. On June 23, just before the Olympics, Hirata reported online to the President and Chairman, Board of Trustees via Zoom and this time, she reported on her achievements together with General Manager of the Shooting Club, Katsushi Mizuno (Professor, School of Commerce) and Head Coach Tomoki Sahashi.

Talking about her feelings on taking part in the Olympics, Hirata said, “I competed in three events and at first, I was nervous, but I was able to concentrate on what I was doing.” Smiling, she went on to add, “The infection control measures made it almost impossible to have any interaction with other athletes, but on our way to the restaurant in the Olympic Village, there were times when we were able to see each other and I was asked to exchange pin badges by athletes from other countries, so we did manage to interact, even if only a little.”

With words of praise and encouragement, President Dairokuno and Chairman, Board of Trustees Yanagiya stated, “We are so proud that a current student at our university has taken an active part in the Olympics. You fought really hard amid difficult circumstances,” (President Dairokuno) and, “I hope you will also go on to meet the challenge of the next Olympics in Paris.” (Chairman, Board of Trustees Yanagiya)

Finally, the meeting was adjourned with flowers presented to Hirata and commemorative photographs taken. She made an oath that she would continue with her competitive activities after she had graduated.