Meiji University and Wakaba Higuchi of the Skating Club receive the Commendation by the Minister of Education, Culture, Sports, Science and Technology

President Dairokuno and Higuchi with the certificate of commendation (October 14) 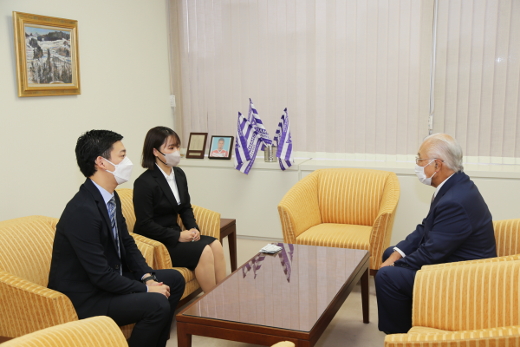 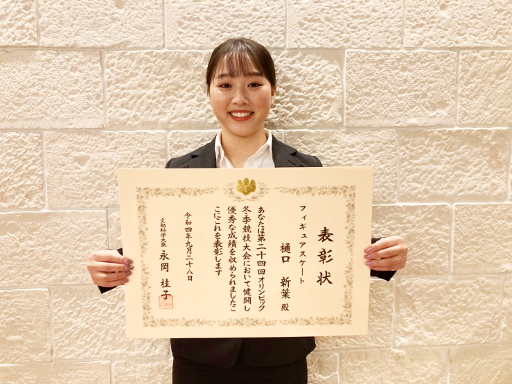 Higuchi with the certificate of commendation (September 28)
Meiji University and Wakaba Higuchi (4th year in the School of Commerce) of the Skating Club received the Commendation by the Minister of Education, Culture, Sports, Science and Technology on September 28.

This award is presented by the Minister of Education, Culture, Sports, Science and Technology to athletes and coaches who have achieved outstanding results in world-class sports competitions, referees who have made contributions of particular note to the promotion of sports, and organizations that have provided support for sports activities over many years. Higuchi participated the Beijing 2022 Olympic and Paralympic Winter Games and was recognized for her significant contribution to winning a medal in the figure skating team. Meiji University was also honored as a support organization.

On the same day, Higuchi and skating club Head Coach Sasaki (graduated from the School of Law in 2015) attended the award ceremony at Happo-en "Jour" (Minato City, Tokyo).

Report from Higuchi to President Dairokuno on the award
On October 14, Higuchi and Head Coach Sasaki visited President Kosaku Dairokuno and reported on the award. In her report, Higuchi expressed her gratitude to those involved with the university and smiled, saying, "I would be happy if I could one day parade with the students of Meiji University, just like the Baseball Club (which held a parade and victory celebration after winning the Tokyo Big6 Baseball League championship).

President Dairokuno expressed his pleasure at Higuchi receiving the award and said, "Ms. Higuchi is a representative athlete of Japan. The entire university will continue to support her.”