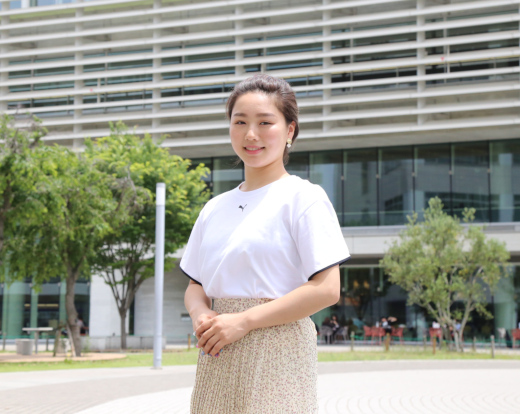 Higuchi during an interview with the Public Relations Office
At the Beijing Olympic Winter Games, Japan won a bronze medal, its first podium, in the figure skating team event, which Wakaba Higuchi (3rd year in the School of Commerce) took part in.
The figure skating team is a new event which was adopted at the 2014 Sochi Winter Olympics. Ten teams, including Japan, participated and competed in the four events of women’s and men’s single skating, pair skating, and ice dance.
Higuchi took part in the women’s short program on February 6. Although this was her first time to participate in the Olympic Games, she scored 74.73 in total to earn 2nd place by performing without any mistakes and contributed to the medal for the Japanese team.