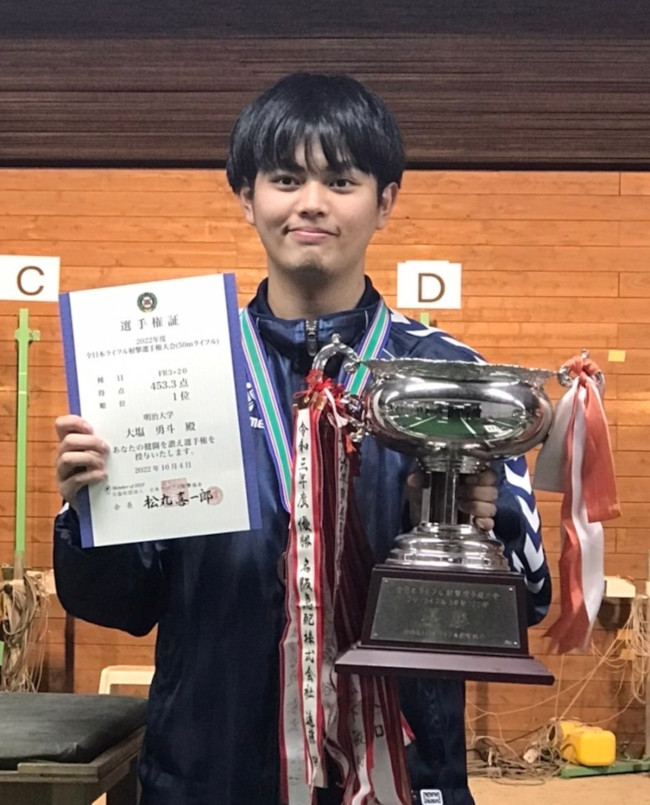 Yuto Oshio after the awards ceremony

Yuto Oshio (3rd year in the School of Political Science and Economics) of the shooting club won the three-position event at the All Japan Championship and All Japan Selection Tournament held at Nagatoro Shooting Range in Saitama Prefecture (Nagatoro-cho, Chichibu-gun, Saitama Prefecture) from November 4-6, 2022.
Oshio placed 3rd in the preliminary round (60 rounds) to progress to the final round (45 rounds) where he scored 153.6 points in the kneeling position and 155.3 points in the prone position to take 1st place. In the standing position that followed, he scored 144.4 points for a total of 453.3 points, a new personal best, and an impressive victory.

The comments from Oshio and Head Coach Tsuba are as follows.
Yuto Oshio (3rd year in the School of Political Science and Economics)
I would like to thank the many people who have supported me to this point. Winning a general competition and not only a competition for students was a very special for me and has given me confidence. I will continue to devote myself to further improving my competitiveness as I have more big competitions ahead.

Head Coach: Kyohei Tsuba
It is said that it is difficult for students to win in the three-position event at the All Japan Championship, at which athletes from company teams and the Japan Self-Defense Forces Physical Training School also compete. Thus, I have nothing but admiration for Oshio who continued his winning streak at the All Japan University Sports Shooting Championship. I think this is the result of his dedication to competition. I look forward to his further success in the future.
Related links
Back
News & Events