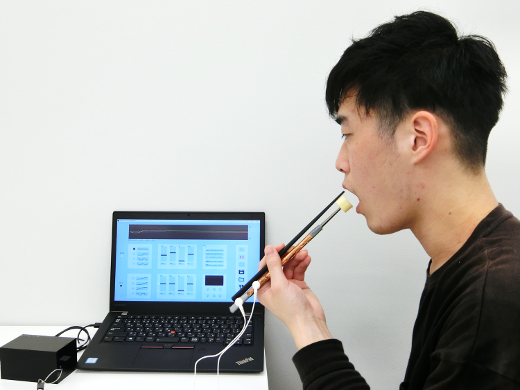 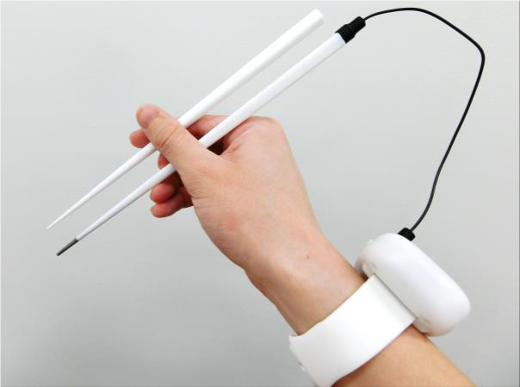 TOKYO, April 11, 2022 –The Meiji University Dr. Homei Miyashita Laboratory of the Department of Frontier Media Science, School of Interdisciplinary Mathematical Sciences (Miyashita Laboratory) and Kirin Holdings Company, Limited (Kirin Holdings), have developed an electrical stimulation waveform and chopstick device that enhances the taste of low-sodium foods as a result of joint research. Furthermore, in clinical trials with people who follow a low-sodium diet, the use of the chopstick device enhanced the salty taste perceived when eating low-sodium foods by about 1.5 times*1. The result of salty taste enhancement via electrical stimulation is a world first*2.
*1 Change in evaluation of saltiness between a sample that imitates an ordinary food and a sample with 30% less salt.
*2 The world's first study to confirm the salty taste-enhancing effect of electric taste on people with low-sodium diets / sourced by Kirin Holdings (Based on information published as of March 1, 2022)

Not just chopsticks but other utensils can be used to maintain low-sodium diets
This joint research has discovered the possibility of using the effect of salty taste enhancement by electrical stimulation on everyday utensils such as chopsticks, spoons, and tea bowls, thereby increasing the level of taste satisfaction with low-sodium foods. This technology may prove helpful for people trying to, or need to maintain a low-sodium diet.

The daily salt intake of Japanese adults is 10.9g for men and 9.3g for women*4, which is extremely high compared to World Health Organization (WHO) salt intake standards*5. Excessive salt intake can easily lead to the onset and severity of lifestyle-related diseases such as hypertension and chronic kidney disease, and has become a major social issue. In order to achieve the target amounts for the prevention of lifestyle-related diseases (less than 8.0 g per day for adult men and less than 7.0 g per day for adult women*6) set by the Ministry of Health, Labour and Welfare, it is necessary to reduce current salt intake in the Japanese diet by more than 20%. Furthermore, although a salt intake of less than 6.0g per day is considered desirable to prevent serious lifestyle-related diseases*7, many people find low-sodium diets to be "bland," and this has been a hurdle to maintaining a low-sodium diet.
*4 National Health and Nutrition Survey, Ministry of Health, Labour and Welfare, 2022
*5 Less than 5.0 g/day (2012, WHO guidelines)
*6 Dietary Reference Intakes for Japanese (2020 edition), Ministry of Health, Labour and Welfare
*7 The Japan Society of Hypertension Guidelines for the Treatment of Hypertension. Japan Society of Nephrology Evidence-based CKD Treatment Guidelines 2018.

Since 2019, Miyashita Laboratory and Kirin Holdings have been working on "electric taste sensation." "Electric taste sensation" uses very weak electricity - not enough to affect the human body - to adjust the function of ions such as sodium chloride (which is the basis of salty taste), and sodium glutamate (which is the basis of sweet taste), to change the perception of taste by making food seem to taste stronger or weaker.

The Miyashita Laboratory and Kirin Holdings have now developed an electrical stimulation waveform that controls perceived saltiness with a weak electric current and enhances the taste of low-sodium foods. Furthermore, the Miyashita Laboratory and Kirin Holdings have created a chopstick-shaped device equipped with this technology and conducted clinical tests on people who actually follow a low-sodium diet, and have confirmed that the device enhances the salty taste of low-sodium food by about 1.5 times.

Outline of Research
Research Method
Thirty-six men and women aged 40-65 years who are currently reducing sodium intake or have done so in the past were tested using a chopstick-type device (Figure 1) that delivers weak electrical stimulation to samples that imitate ordinary food (gel containing 0.80% salt) and samples that imitate reduced-salt food (gel containing 0.56% salt). After tasting the sample (which contained 30% less salt than the sample that imitated ordinary food), a test was conducted to evaluate the intensity of the perceived saltiness. The same device was also used to evaluate changes in the salty intensity and flavor of reduced-sodium miso soup. 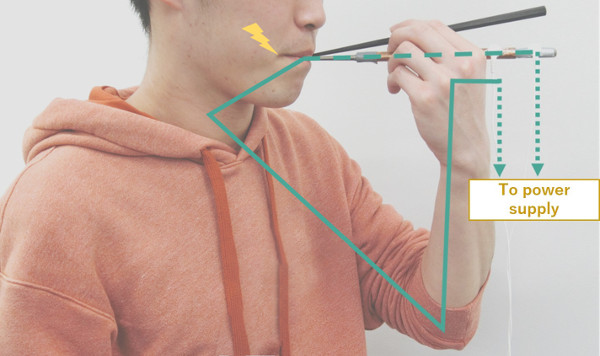 Figure 1: Chopstick-like device that provides weak electrical stimulation
Research Results
When tasting samples imitating low-sodium food, the perceived saltiness was enhanced by a factor of 1.5 when the developed electrical stimulation waveform (Figure 2) was applied to the chopstick device, compared to without electrical stimulation. In addition, the study confirmed that the intensity of salty taste of the sample imitating low-sodium food was the same as that of the sample imitating ordinary food when electric stimulation was applied (Figure 3). This suggests that when food with 30% less salt is consumed, a device equipped with this technology can provide a salty taste equivalent to that of a regular meal.

In addition, in an experiment using reduced-sodium miso soup, the salty taste enhancement effect was confirmed, and the participants commented that they felt an improvement in richness, sweetness, and overall tastiness. 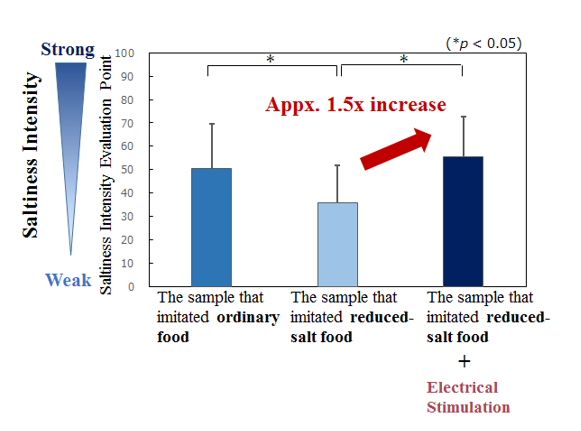 Figure3: Saltiness enhancement effect of electrical stimulation
Future Development
Kirin Holdings will continue to develop new services that support lifestyle disease prevention by increasing dietary satisfaction to make consumers’ diets tastier, more enjoyable, and healthier. In the future, the Miyashita Laboratory and Kirin Holdings aim to use the results of this joint research to provide both mental satisfaction from a richer perceived taste along with health benefits derived from nutritional aspects for those who follow a low-sodium diet.