Spoon and Bowl that enhance the salty taste of low-sodium food by approximately 1.5 times*1 via stimulation. 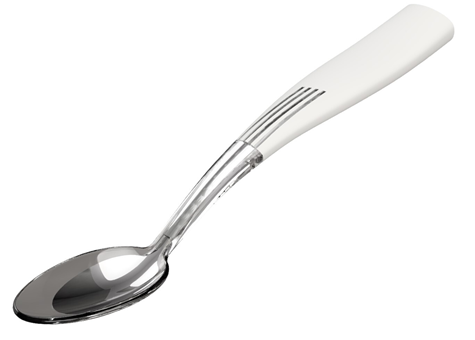 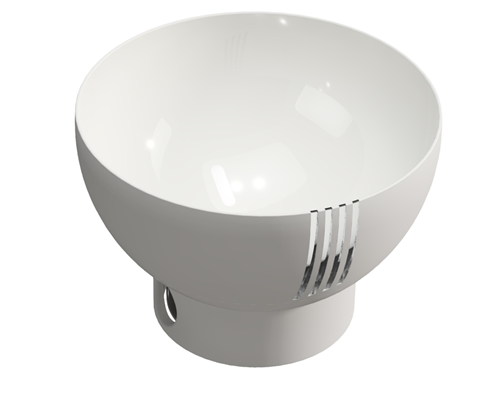 
●Developed a unique current waveform that enhances the saltiness of low-sodium foods by approximately 1.5 times.
●Spoon and bowl-shaped "Electric Salt" devices with this current waveform have been developed.
●Joint demonstration experiment with two companies proposing healthy eating started in September.
●Aiming to launch the device in Japan in 2023.

TOKYO, September 7, 2022 – The Meiji University Dr. Homei Miyashita Laboratory of the Department of Frontier Media Science, School of Interdisciplinary Mathematical Sciences (Miyashita Laboratory) and Kirin Holdings Company, Limited (Kirin) , have developed a unique electric stimulation that enhances the salty taste perceived when eating low-sodium foods by approximately 1.5 times and developed a spoon- and bowl-shaped "Electric-Salt" devices that incorporate this technology.
Kirin, in collaboration with Noruto Company, Limited (Noruto) and The Orangepage Inc. (Orangepage) will begin a demonstration experiment in September to evaluate meal satisfaction by providing this device and a low-sodium meal as a set.
We are aiming to launch the "Electic Salt" device in 2023. Through this device, we aim to realize a society in which people can improve their lifestyle in a delicious way.
*1 Change value of evaluation regarding saltiness intensity in a sample that imitates ordinary food and a sample with 30% less salt. Tested using chopsticks equipped with Electirc Salt technology (current 0.1~0.5 mA). Thirty-one men and women aged 40-65 years who are/were currently or have been reducing salt in the past were asked about the saltiness intensity they perceived when eating the test food, and 29 of the 31 respondents answered that the saltiness had increased.

The social issue of "too much salt"


The daily salt intake of Japanese people is 10.9 g for men and 9.3 g for women over 20 years old*2 , which is known to be very high compared to the World Health Organization (WHO) salt intake standards*3 . In recent years, the Japanese market for low-sodium and salt-free foods has continued to expand due to increasing health consciousness, growing by approximately 26% over the five-year period from 2015 to 2020, with sales projected to be 141.3 billion yen in 2020.*4 In a survey conducted by our company*5 of residents in the Tokyo metropolitan area, we found that approximately 63% of those who are eating a low-sodium dietor intend to do so feel that it is a challenge, and of these, approximately 80% are dissatisfied with the taste of their low-sidium food. If people can continue to enjoy eating a low-sodium diet, it will help improve their health challenges and may further expand the market for low-sodium and salt-free products.
*2 National Health and Nutrition Examination Survey, Ministry of Health, Labour and Welfare, 2022
*3 Less than 5.0 g/day (2012, WHO guidelines)
*4 Fuji Keizai, "Wellness Food Market Outlook 2019". 2020 market size is a forecast.
*5 Kirin research Survey period: June 2021 Target: Men and women aged 40-79 living in the Tokyo metropolitan area (N=4,411) Format: Web survey, About 47% of all respondents are eating a low-sodium diet/willing to do so


In response to this social issue, since 2019, we have been conducting research in collaboration with Dr. Homei Miyashita Laboratory on the use of "Electric taste sensation" technology, which uses a very weak electric current that does not affect the human body to change the way food tastes in a pseudo-sensory perception. As a result of this research, we have developed a unique electric current waveform that enhances the taste of low-sodium foods, and have confirmed for the first time in the world that the salty taste perceived when eating low-sodium foods is enhanced by about 1.5 times in a clinical test on people who are/were reducing salt. 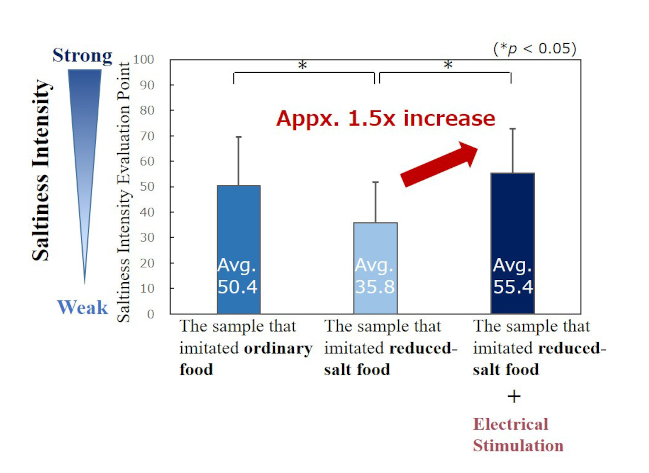 
In our survey*6 , Ramen noodles and Miso soup ranked first and second in terms of "foods that people who are trying to reduce salt intake want to eat with a strong taste instead of a thin taste. We found that there is a high need for "reward foods" such as ramen, which they like but have refrained from eating due to salt reduction, with a strong flavor, and a high need for tasty soup, which they have a habit of eating on a daily basis but are dissatisfied with the taste.
With the aim of eliminating the patience customers have in these salt reductions and making their meals more enjoyable, we have developed "Electric Salt - Spoon -" and "Electric Salt - Bowl -", which are suitable for eating Ramen noodles and soup.
The newly developed "Electric Salt -Spoon-" and "Electric Salt -Bowl-" are more advanced and equipped with the electric stimulation waveform technology*7 , which was developed by Dr. Homei Miyashita's laboratory and Kirin and presented as a chopstick-type device, for social implementation.
*6 Kirin research Survey period: January 2022 Target: 120 men and women aged 30-69 who are practicing salt reduction Format: CLT survey, multiple responses allowed
*7 Press release on the results of this research (Monday, April 11, 2022) https://www.meiji.ac.jp/cip/english/news/2022/t4q24j0000006ezt.html 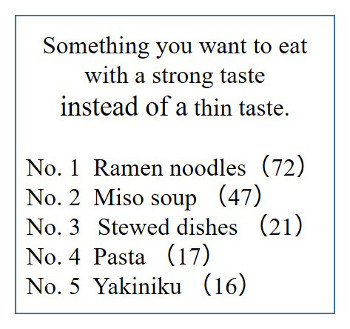 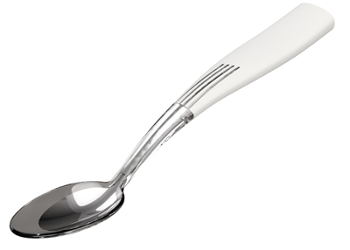 Electric Salt Spoon
Features
Turn on the power with the switch on the handle of the spoon and set the intensity (4 levels) to your preference.
After making your selection, use the spoon in the same way as a normal spoon.
A weak electric current is passed through the food to produce the effect, from the tip of the  spoon.
Possible Uses
Instead of a ramen noodle’s spoon
For soups and curries with lots of ingredients
Other meals in general 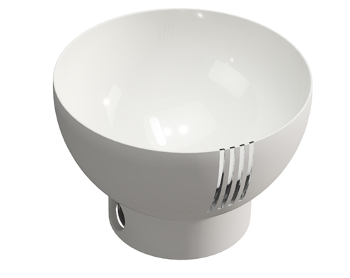 Electric Salt Bowl
Features
Turn on the power with the switch on the side of the bowl and set the intensity (4 levels) to your liking.
After making your selection, use the bowl as you would a regular bowl.
Hand the bottom of the bowl.
By holding it, a weak electric current flows inside the bowl to produce the effect.
Possible Uses
When drinking Miso soup or soup
As a serving bowl for Ramen noodles and Udon noodles


In order to make everyday life with less salt richer, we will also propose healthy food to be enjoyed with " Electric Salt -Spoon-" and " Electric Salt -Bowl-", using our knowledge cultivated as a food company. In September of this year, a demonstration experiment using the "Electric Salt" device will be conducted jointly with Noruto, which operates the low-sodium specialty store "Muen.com" that handles the largest number of products*8 in Japan, including products developed by the company, and Orangepage. The demonstration experiment will begin in September, with members of each company being invited to participate. Delicious low-sodium meals jointly developed by the two companies will be offered as a set with the " Electric Salt " device, and their level of satisfaction will be evaluated.
*8 Largest number of low-sodium food products handled in Japan/ researched by Nord (based on publicly available information as of August 8, 2022 (Monday))

Outline of the Demonstration Experiment
(1) Period of implementation: September to November 2022
(2) Subjects:. Members of Noruto and Orangepage
(3) Implementation details: Tasting survey at the venue, Home use test to be used at home 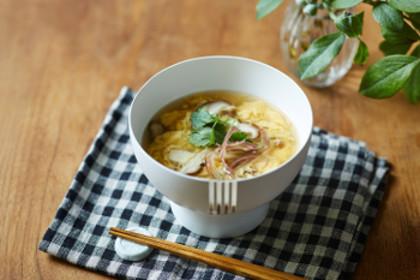 
The usefulness of the "Electric Salt" device will be verified through demonstration experiment this year, with the aim of launching the device in Japan in 2023. We are developing the "Electric Salt" device to deliver value to customers who have concerns about salt reduction. In the future, we will promote collaboration with several companies that deliver healthy food to customers, and aim to provide services that enable customers to enjoy, taste, and achieve healthy eating habits without endurance or frustration.