The players celebrating their victory 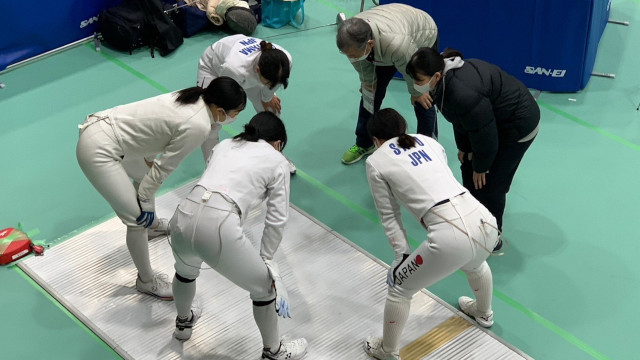 The players in a circle before the game

Meiji, which competed as last year’s runner-up team, went on to win against the best teams in the nation and faced Nihon University in the final for the second year in a row. The team won 45-29, achieving their first win.

The players commented as follows.

Kotomi Sato (3rd year in the School of Political Science and Economics)
I am very happy that we were able to win the All Japan Fencing Championship for the first time in the history of the women's club. After disappointingly finishing as runners-up last year and a third-place finish at the most recent intercollegiate competition, the team has been training hard with the goal of winning the championship at this All Japan Championship. I was anxious at the competition because we were a new team, but with the support of my fourth-year seniors, I felt that I was able to focus on each bout one at a time. We will do our best to achieve better results next year than we did this year.
Lastly, I would like to express my deep gratitude to the alumni, parents, and staff of Meiji University for their continuous encouragement and support. We look forward to your continued support.

Club operations manager Yuri Nakamura (4th year in the School of Business Administration)
As we finished second last year, I am very happy that the junior students were able to take revenge and win the All Japan Championship this year. The fact that we were able to battle Nihon University again in the championship match, who we lost to last year, and win, I think it was owing to the fact that each and every one of our members was able to perform to the best of their abilities. At first, the players’ movements were a little stiff due to the pressure, but the entire team showed strong solidarity by scoring point by point.
The strength of Meiji is that the members are close to each other, regardless of their year. Next year, I hope that this teamwork and each member's strong play will be further improved to achieve the five titles of Kanto Student League, All Japan Student Championship, Kanto Student Fencing Championship, All Japan Student Fencing Championship (Intercollegiate), and All Japan. Lastly, I would like to express my deep gratitude to the alumni, parents, and staff of Meiji University for their continuous encouragement. We look forward to your continued support.