[Football Club] Joint press conference held for 6 players who will join the J.League 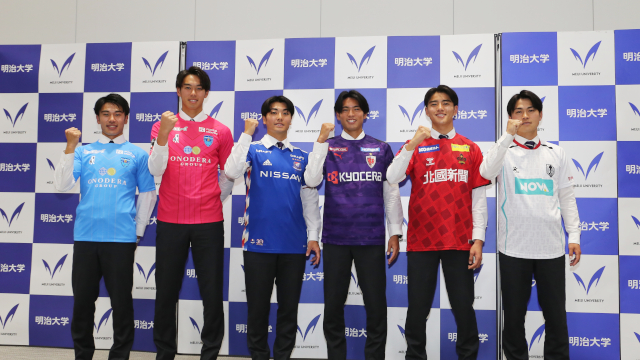 Six players in their new club uniforms at the photo session


On December 22, the Meiji University Football Club held a press conference at the Global Front on the Surugadai Campus for players who have reached informal agreements to join J.League clubs.

The press conference started with remarks from Yoshiaki Koshikawa, General Manager of the Football Club (professor in the School of Arts and Letters), and Head Coach Daisuke Kurita. Referring to the FIFA World Cup held recently, Head Coach Kurita said, “Everyone felt happy and sad as one, facing the same direction. Sports, including soccer, have such energy. As the strongest amateur team, we, Meiji University, would like to produce great talents to the world.” He also expressed words of encouragement, saying, “I would like these six players to understand the ideal model required for each team and keep challenging themselves beyond the model.”

Next, the six players expressed their gratitude to the members and staff of the club and their joy at the offer, and pledged their success after joining the J.League.

The players commented as follows.

Kotaro Hayashi / YOKOHAMA FC
The final of the Intercollegiate Championship 2019 was the most impressive event for me in the four years. Watching the outstanding performance of seniors from the cheering section, I wondered how I could catch up with them in four years. Since then, I put a lot of efforts into my practice. In addition to the performance of the 11 players on the pitch, I was also impressed by the great tradition of Meiji University, such as support of our club members and alumni in the cheering section as well as the school song sung in unison. I think this has brought me to where I am today. From the World Cup, I found that a professional soccer player is a wonderful occupation. I will strive to become a player that can give inspiration and courage to many people.

Masaki Endo / YOKOHAMA FC
When I first watched the game and cheered for the players from the stand in the first year, I felt all the club members were battling as one. It gave me a strong impression that this is the soccer of Meiji University and tradition that has been built by our seniors. At the match against Nippon Sport Science University in the aminoVITAL Cup in my fourth year, cheering aloud was finally allowed after a long time. I was happy that we could show our juniors how our club members fight as one through cheering. I will do my best to become successful as a J.League and national team player, so that people will become more interested in college soccer in the future.

Takuto Kimura / YOKOHAMA F･MARINOS
At the Football Club of Meiji University, I believe I was able to develop not only my soccer skills but also my human nature. I will exert all of my capabilities that have been developed during my four years in university, so that I will be able to play an active role in the J.League.

Shinnosuke Fukuda / KYOTO SANGA F.C.
Surrounded by seniors, peers and, juniors in the same position, I was able to spend enriched days. By making the most of my strengths and tackling challenges head-on, I would like to show my success as a regular member. As I will be a professional player myself, I would like to raise the value of sports and soccer from that standpoint, and make the country full of sports attractions.

Fuga Sakurai / Zweigen KANAZAWA
Of the 13 of us who entered the university on sports recommendations, five were in the same full back position, so my self-confidence and pride were sometimes crushed. However, our seniors had always been acting for the team's victory in any situation. Some fourth-year students were cheering loudly in the front row even though they had been on the second team throughout the four years. Seeing these seniors, I had also been fully committed to the team for the four years. It is now a treasured asset for me to have been able to compete for positions with my wonderful peers through friendly rivalry. Even after graduation, I will continue to fight as hard as I can throughout my life.

Koki Matsubara / IWATE GRULLA MORIOKA
In the summer of my third year in high school, I had the opportunity to join in a practice session of the Football Club of Meiji University, and saw seniors fully devoting themselves to their practice. Attracted by their attitude and enthusiasm, I decided to go to this university. On my first day of practice after joining the club, I realized how weak I was. However, I dedicated myself to soccer here for the four years. My experience of cheering and assisting players has also become my lifetime treasure. I will do my utmost for the team's promotion to J2 and J1.