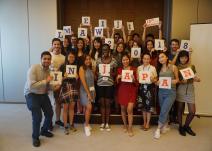 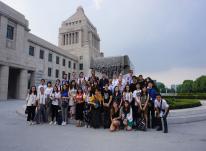 Field trip to the Diet Building 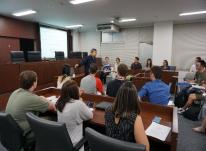 A lecture on the judicial system by Associate Professor Teruhisa Komuro of the School of Law, held in a mock courtroom 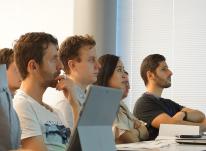 Participants in the lecture class
Meiji University School of Law held Session 1 of its “Law in Japan” Program, a short-term summer study program for overseas students to study the Japanese legal system, from July 2 to 13. Session 2 was held from July 30 to August 9. This year marked the tenth anniversary of the program.

Applicants must be aged 18 and older, and enrolled in universities or graduate schools overseas. Graduates are also accepted. No prior knowledge of law is required. In response to the growing number of applicants, the program has, since last year, been held twice annually. This year’s 53 participants came from 21 countries, and included students at universities with which Meiji’s School of Law has inter-department collaboration agreements, such as De La Salle University’s College of Law in the Philippines, Nanjing Normal University in China, and the University of São Paulo in Brazil, as well as universities in Singapore, Taiwan, Hong Kong, Italy, Spain, France, Romania, Turkey, the United States and Mexico.

The program consists of 27 hours of lectures and 10 hours of field trips. The participants studied Japan’s constitution and the judicial system, as well as the Intellectual Property Law, International Law, and Labor Law, among other subjects. On the field trips, they visited law firms, the Tokyo district public prosecutor’s office, a prison, the Diet Building, and other sites. Both the lectures and the field trips helped the participants extend their knowledge on a broad range of fields and topics.

On the last day of the program, a ceremony was held at which each participant was presented with a certificate to mark their completion of the program. A farewell party was also held, with Meiji University law students who had taken part as supporters during the program, in addition to the participants and lecturers in charge of the classes. The party was a good opportunity for all to discuss their accomplishments and share their most memorable events during the 2-week program.

Message from Shuhei Mizuta, Program Director and full-time lecturer at the School of Law
Meiji University’s English-language “Law in Japan” program, designed to educate overseas students about the Japanese legal system, began in 2009 and marked its 10th anniversary this year. This is one of our new educational programs that will enable Meiji University to develop and grow as a global educational institution and play a part in the government-funded Project for Establishing Core Universities for Internationalization (“Global 30”). The “Law in Japan” Program began with only three participants. Since then, it has grown steadily, with more than 200 people having taken part so far. Initially, the largest number of students came from Europe, but we are now seeing more participants from countries in the Asia-Pacific region. We hope to continue to improve this program and make it develop and expand, so that overseas students who have taken this program will cultivate their interest in Japanese law and perhaps develop a desire to continue their studies at Meiji University.