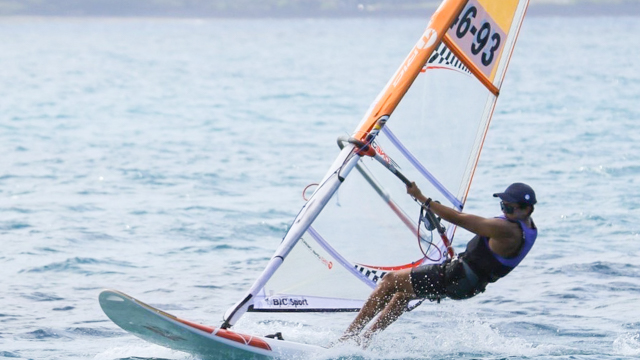 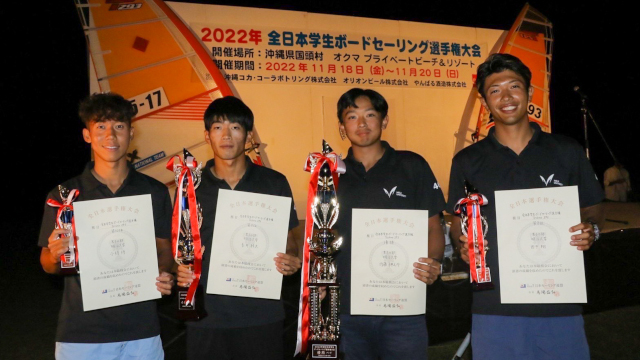 A total of seven races were held at this year's event. Naito finished first in races 2, 3, 5, and 6, defending his lead after a close battle.

The players commented as follows.
Shinnosuke Naito
I have had a lot of frustration this year in not being able to win a tournament, but I am very happy that I was able to win the individual competition of the Intercollegiate Championship. Moreover, being able to take first place in a race in light winds, which I felt not very good at, gave me a lot of confidence. For about the next three months, we will continue to work directly toward our goal of the fifth consecutive win in the Intercollegiate Team Championship, so please give us your support.

Sho Tanaka
Although it is a frustrating result for me individually because I did not achieve my goal, I am happy as captain that we had four place getters in the team. We will step up another gear and devote ourselves to achieving the fifth consecutive win in the team competition.

Kanta Nagai
I think the fact that we had four place getters was a great boost for the team victory. As an individual, I was able to run ahead in wind that suited my style, and this gave me confidence. We will not get carried away with this result, but will work even harder for the team competition.

Masashi Kobayashi
As an individual, the result was brought about by that I devoted four years, and I am relieved to see the consequence of all that hard work I put in to achieve my goal of placing in the competition. Since the Meiji team as a whole was able to achieve a good result, we will once again brace ourselves and strive to improve not only individually but also as a team so that we can achieve our long-cherished goal of winning the Intercollegiate Team Championship for the fifth time in a row.