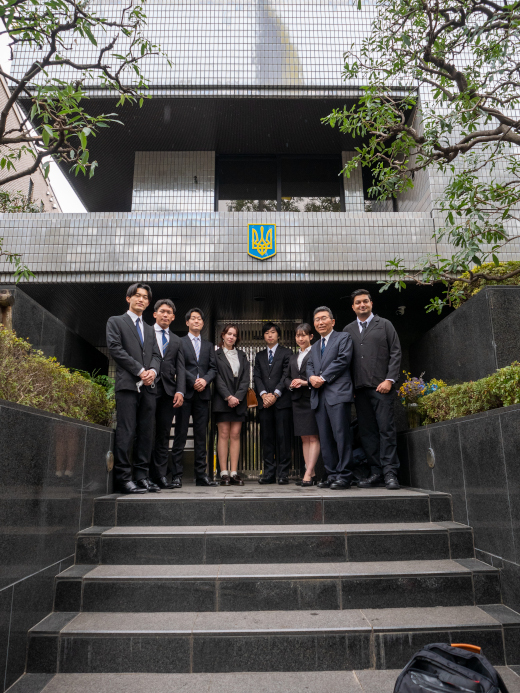 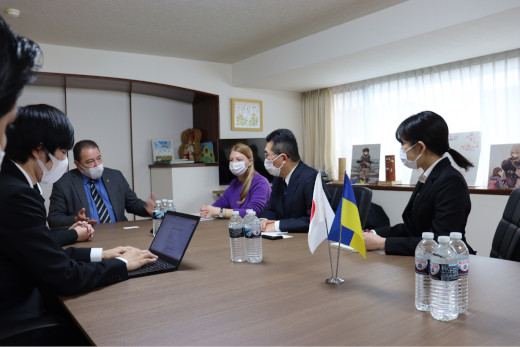 Let us introduce the 3rd “Ukraine Project” by the Unno Seminar, of Meiji University’s School of political science and economics.

On December 5th 2022, the Unno Seminar interviewed Dr. Korsunsky Sergiy, the ambassador extraordinary and plenipotentiary of Ukraine to Japan, at the embassy of Ukraine in Japan for over an hour.

The purpose of our interview was to clarify president Zelensky’s leadership and communication styles.

The questions and answers are as follows.

Q1:
In your speech (in Moriya city on October 1st), you evaluated the speech ability of president Zelensky, and I would like to know more on his speech ability. So, could you tell me concrete examples (of Zelensky’s speaking skills/ability)?

A1:
That’s actually his profession before he was elected. He’s an artist. And when you are an artist, you always practice how you communicate. This is a major skill to be successful. And he was a very successful actor, and as you know, he has his own performance company, and he is a TV actor too.

So, that means that he’s very well skilled to keep audience attention and to speak with passion and to influence this audience. (Using this) He began speaking to leaders of the world, to the parliaments of the world endlessly, maybe 5, 6, 7 speeches a day, endless communications by the phone.

Q2:
When I read many literatures (on Zelensky), I found some opinions that criticize president Zelensky. In fact, his approval rate was lower now. So, are there any differences between before and after the war?

A2:
Ukrainians have the tradition, (where) they first elect (the) president, and the next day, they begin criticizing him. That’s what we do all the time. It doesn’t matter.
But now, you see clear leadership, he stayed in Kyiv.

And what is important as well, for many people, (is) that he is not intervening in (the) military business. Zelensky separates. He said, military goes to general stuff and to ministry of defense, do your job. My job is at the political level.

So, he allowed professionals to do their job, and they’re doing it very well. His job, political support, (and) his job to talk to politicians, to set up important initiatives to support Ukraine.

Q3:
So, a different style of management (compared to former president Porchenko)?

Q4:
Do you think democratic values of President Zelensky is the main thing that helps him have the trust of your nation (Ukraine)?

A4:
It’s (an) important question. Actually, I would not just call them democratic values, I would call them human values. Zelensky is a very human person. His attitude to work (for) the lives of people and to the casualties we encounter, they are very sincere. And that is very painful for him personally, there’s no doubt about it.

He is a very family man. And that is another kind of important issue for Ukrainians because in our golden standard, you must have a home, you must have (a) garden, and you must have a family. So this is kind of what you want to have in your life. So he demonstrates that his family is very important.

Q5:
Are there any Japanese political figures who have a similar leadership style? What do you think is common between Japanese and Ukrainian leaders in their communication style?

A5:
So, this is a difficult question for me, because I am not in the position to judge.

The difference is that in Ukraine, we (are) used to saying things much more straight.
In Japanese, you always try to avoid direct messages, at least negative messages.

A6:
Very good question. This war in Ukraine? This is (the) first war in the history of mankind, during the existence of Facebook. Facebook began (in) 2010. So never, ever before (this) war, major war was happening with social platforms in place. So, it is truly interesting to investigate and to consider, as research how you use media platform, social media platforms for propaganda or counter propaganda.

And definitely in our use case, in Ukrainian case, we met this war in 24 of February well prepared, because our war, as I told you, began in 2014. So, for eight years, we were practicing endless social media and counter propaganda. And we have in Ukraine, several very powerful counter propaganda institutions like “Center for Digital Disinformation Campaign”.

Throughout the interview, we learned that:

Firstly, President Zelensky’s personality and values were understood and highly valued by the Ukrainians.

Finally, we came to the realization that the war between Ukraine and Russia was the first major war in the era of social media. Dr. Korsunsky Sergiy, the ambassador extraordinary and plenipotentiary of Ukraine to Japan, made it clear that the role of social media is colossal. The main reason is that preparing against misinformation and propaganda online, is a crucial component of war.

We will continue on with our “Ukraine Project”, with a 4th to be following.

Back
School of Political Science and Economics