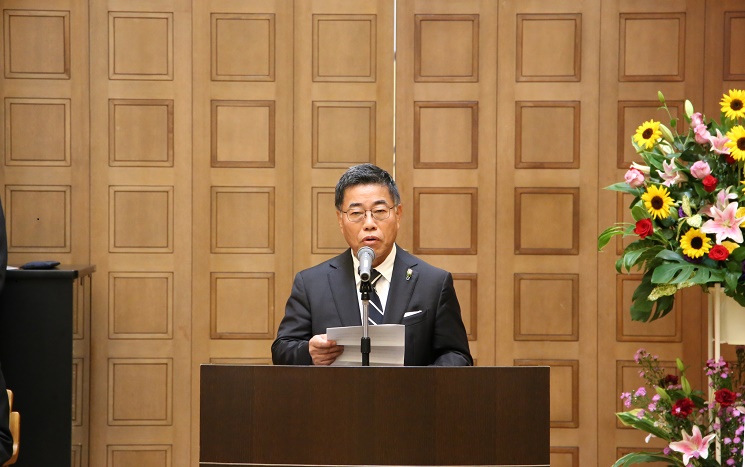 On behalf of the whole of the Meiji University community, congratulations and welcome to all of you.

This year is the 136th year since the founding of Meiji University. Looking back at Japan’s history, many universities were founded after the Meiji restoration, under the banner of modernization. This was especially the case with private universities, which were set up based on the spirit of their founding principles.

When Japan was pursuing modernization under the national slogan of wealth and military strength, the three law scholars who founded Meiji University proclaimed its founding principles of “Rights, Liberty, Independence and Self-governance.” By this we can appreciate their notion of modernization, influenced by the European enlightenment that they experienced during their studies in France.

However, Japan made a crucial mistake. After the 1930s, Japan invaded Asian countries based on the theory of imperialism and colonialism. This caused misery and tragedy to those Asian countries, and Japan sacrificed the lives of thousands of young people by sending them to the battle field. Japanese universities, including Meiji University, did not have the strength to stop this tragedy. Japan has spent over 70 years since World War II, reflecting on its past conduct.

The reason why Japan strives to be connected to the people of Asia and the world is because of this reflection on the experience of war. It is a strategy for peace. And universities are the places which should seek ways of attaining human rights and peace. Universities are places where we can collaborate globally, hand in hand, and solve the challenges of humanity, so that we never repeat the tragedy of war.

In other words, the university must strive to be a Utopia with its gates wide open and welcome anyone from around the world. This May, I had the honour and privilege to meet the United Nations Secretary General, His Excellency Mr. Antonio Guterres, who holds an Honorary Doctorate from Meiji University. Our main purpose in meeting him was to explain the current situation regarding the refugee acceptance scheme. The United Nations Secretary General expressed his desire for Meiji University to be the leading institute for accepting refugees and opening the doors wider for more refugees to study at Japanese universities. Meiji University accepts refugee students because we believe that universities should provide space for those people who have, through no fault of their own, lost their homes. We should open the windows of opportunity for such people to live and thrive. Meiji University welcomes students who foresee an opportunity for a bright future by attending Japanese universities. Meiji University is an academic community accommodating students who have different backgrounds who are from various countries and regions. I hope to see students taking the first step into the world by studying at Meiji University.

We would like our students to pursue and create a vigorous life that reflects our founding principles of Rights, Liberty, Independence and Self-governance. Our faculty and staff are here to support your goals for lifelong achievement.

In addition to your academic studies, you will find many fun things to do. College sports, as in the US and UK, are very popular at Meiji University. Sports express a culture of enrichment as well as possibility. We can learn a lot from sports, and at the same time, discover artistic beauty through the coming together of spirit and body.

As a student at Meiji, whatever sports may interest you, please take this opportunity to go and watch these games. I am sure that college sport can enliven your university life.

Meiji University is a fountain issuing forth vital spirit. Opportunities for studies, sport and interaction with the world are all here for you. You all have the chance to breathe in this spirit. As you bathe in this font of vital spirit, I think that you will all realize why Meiji University continues to attract over a hundred thousand applicants each year.

In Japan, autumn is the harvest season. I truly hope that you will start to harvest your own talents during this time of joy. I believe that you all will accomplish your goals which will lead you to a bright and prosperous future. Once again, congratulations and please enjoy your student life at Meiji.